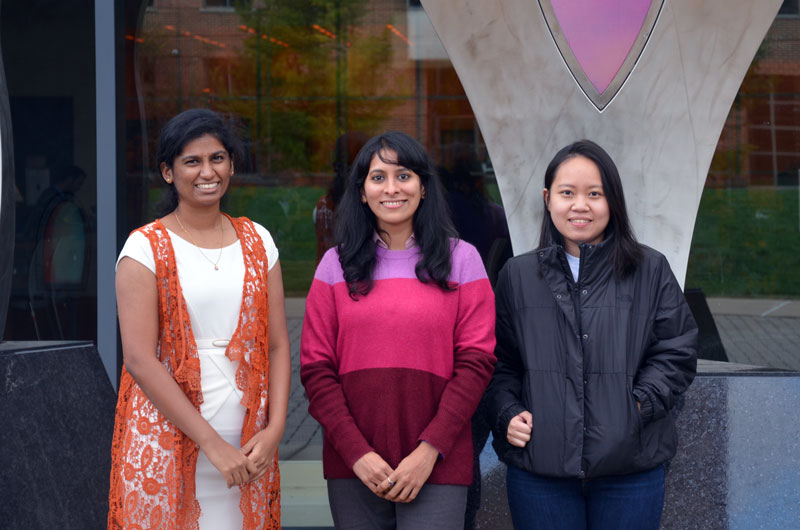 For its ninth year, Rising Stars provided graduate students and post-docs with historically marginalized or underrepresented genders with opportunities for mentoring and practical information they need to launch and sustain a successful academic career in electrical engineering, computer science, and artificial intelligence and decision-making.

“[The workshop] was simply a phenomenal opportunity to mingle with like-minded peers, as well as hear first-hand personal and academic experiences from some of the stars in the field,” said Phal, a member of Bioengineering Professor Rohit Bhargava’s group at the Beckman Institute.

Among the high-profile panelists who spoke about their career paths and how they chose research topics were ACM Turing Award winners Shafi Goldwasser and Barbara Liskov and Nobel Physics Laureate Donna Strickland.

For her doctoral research, Phal is developing label-free IR imaging instruments and techniques to study the biomolecular changes that occur in cancerous tissue in response to drug treatments. She particularly appreciated hearing Ana Arias, a Berkeley professor and pioneer in flexible electronics, speak about interdisciplinary research and starting new research collaborations in the energy field.

“That was helpful to hear because I’m an electrical engineer working in the biomedical applications field,” said Phal, who is committed to empowering underrepresented minorities in engineering and other STEM fields. “Interdisciplinary research is able to open up novel paths that would otherwise not occur within the traditional boundaries of research.”

For Lin, one of the most valuable aspects of the workshop was making connections with the other participants for possible research collaborations in the future. She was also impressed with Google Principal Research Scientist Kathryn McKinley’s talk on networking, where she shared her own mentoring experiences and how they shaped her career.

“She encouraged all of us to start to know peers in our departments, who will definitely become the pioneers of some fields in the future,” said Lin. “In the end of her talk, she randomly distributed the participants to different zoom breakout rooms. This talk reshaped my perspective on the networking and provided a platform to share our research topics with participants from the cross-disciplinary areas.”

In her research, Lin is developing the first-principled space weather model to describe how heavy ions, including nitrogen and molecular ions, flow out of the Earth’s ionosphere, a region of the atmosphere that protects our planet from harmful solar and cosmic particle radiation and erosion. She is advised by ECE Assistant Professor Raluca Ilie.

The Rising Stars workshop was timely for Pattabiraman, who is defending her thesis in mid-November. “A member of Olgica Milenkovicresearch group, Pattabiraman is developing coding techniques for polymer-based storage systems, where information is stored in molecules of different masses.

Pattabiraman learned a lot from MIT Associate Professor Stefanie Mueller’s presentation on how to apply for faculty jobs. Mueller shared her faculty search experience, including a timeline of the process and what to expect from the interviews.

“Another benefit of the workshop was getting to know how many people are with you, going through the same process,” Pattabiraman said. “Finding that community was extremely useful.”

The 2022 Rising Stars workshop will be hosted by the University of Texas Austin in the fall. Application information will be available in the spring or summer.