ECE Professor Alejandro Dominguez-Garcia has authored a new textbook for researchers interested in understanding the impact that uncertainty has on large-scale engineered systems like the electric power grid.

Large-Scale System Analysis Under Uncertainty provides a comprehensive explanation of the mathematical tools used to analyze what happens when there are random disturbances— component failures, for example—in a complex system. Cambridge University Press published the book in February 2022.

According to Alejandro Dominguez-Garcia, different types of uncertainty, namely structural and operational, can lead to failures in the system. An example of structural uncertainty is when a transmission line in a power system fails, while operational uncertainty can be typically associated with renewable-based generation resources like wind and solar, whose output varies according to weather conditions. Both forms of uncertainty effect the overall performance and reliability of the grid.

Each chapter of the book begins with an explanation of the general theory behind a specific analysis technique. Dominguez-Garcia then illustrates the theory via detailed case studies drawn from electric power application problems, including the impact of integration of renewable-based generation in bulk power systems, the impact of corrupted measurement and communication devices in microgrid closed-loop controls, and the impact of components failures on the reliability of power supply systems.

While the case studies focus on electric power applications, the theory presented in the book is applicable to other complex engineering domains.

“People reading the case studies related to power applications can use them as a guide for applying the tools to their own domain areas, including the automotive and aerospace industries,” said Dominguez-Garcia.

What makes his book stand out from other textbooks in the field is that each chapter focuses on a specific mathematical analysis tool and a particular class of systems. This format makes the theory accessible to applied researchers and practitioners, who may be looking to better understand a single tool and class of system. 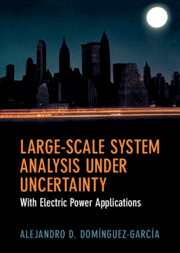 The book cover, which is based on an iconic Life Magazine photograph of the New York City skyline during the November 1965 blackout, is also unique.

Dominguez-Garcia was inspired to write the book after incorporating case studies and lecture notes drawn from his research into the graduate-level courses he has taught. He’s currently using the book in the ECE 554/ME 544 course, Dynamic System Reliability.

“The process of writing the book was rewarding and working with Cambridge University Press was a positive experience,” he said.

He believes the process has made him a better teacher.

“You can teach a subject, but you get a fuller understanding and learn a topic really deep down when you write about it.”