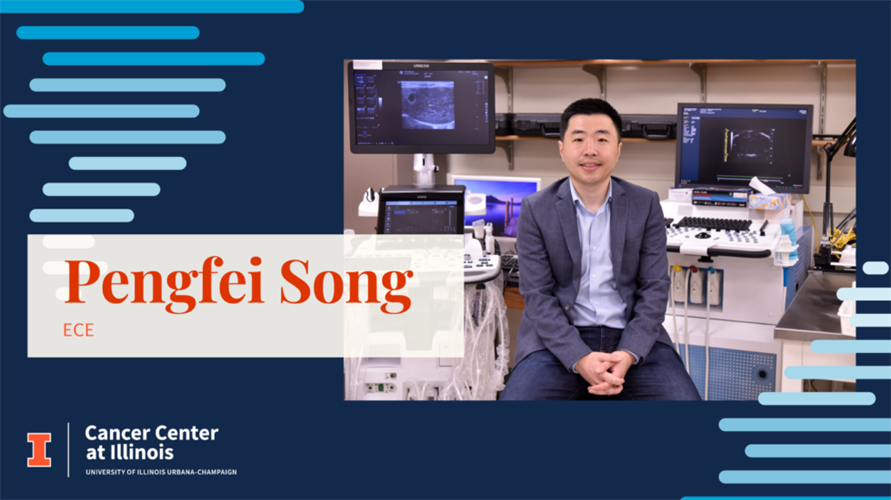 Four in ten* patients screened for breast cancer are at a higher risk of misdiagnosis due to the presence of dense breast tissue. Traditional mammography cannot reliably diagnose the disease in these patients, sometimes even with the help of supplemental screening.

Even with these extra tests, approximately 80% of patients are misdiagnosed with false-positives, causing undue distress and financial strain. About 40% of women present with denser breast tissue in the United States; and an even higher percentage exists among Asian populations, to the degree that some Asian countries prefer other imaging modalities such as ultrasound as a frontline screening technique for breast cancer.

Cancer Center at Illinois researcher and Illinois ECE Assistant Professor Pengfei Song has partnered with Mayo Clinic collaborator, Shigao Chen, to combat this issue. “The question is, what is the best screening  modality for this population?” Song said. “MRI would be ideal, but costly and not accessible in under-resourced settings. Molecular imaging is also costly, even less accessible than MRI, and radioactive.”

Song, also an assistant professor of electrical and computer engineering and a full-time faculty member of the Beckman Institute, is proposing the use of a new 3D multimodal ultrasound imaging technique to tackle the problem. The new technology leverages several key innovations including ultrafast ultrasound, shear wave elastography, and ultrasensitive microvessel imaging. This study has been granted the CDMRP FY20 Breast Cancer Research Program (BCRP) Breakthrough Award from the US Department of Defense, providing the researchers with over $2.2M in funding.

Song and Chen will lead the development of the imaging system and conduct a clinical study with over 100 patients to screen patients with dense breast tissue for breast cancer.

“Now is the time to revisit ultrasound. It’s not as popular here [in the US] because of operator variability and it is not very specific, but powerful functional ultrasound modalities such as elastography and microvessel imaging, especially when paired with machine learning, can be the answer to the screening issue,” Song said.

While the concept of 3D ultrasound is not novel, the equipment required to produce these images can be very costly to manufacture, as they need tens of thousands of elements (sensors). The computational cost also scales with the number of sensors, which makes conventional 3D ultrasound technologies too slow to implement functional modalities such as elastography and microvessel imaging.

However, the researchers will be working on a new 3D imaging transducer that only has a couple hundred sensors and is compatible with conventional ultrasound systems that are used in the clinic.

“Not only does the new transducer technology provide adequate imaging speed to achieve multimodal imaging, but it also paves a clear pathway for future clinical translation of the technologies developed in this proposal to benefit millions of breast cancer patients both in the US and around the world,” Song said.

Read the original article on the Cancer Center at Illinois site.

The views expressed in this article/news release are those of the author and may not reflect the official policy or position of the Department of the Army, Department of Defense, or the U.S. Government.