Every year, University of Illinois faculty submit scholarly or creative proposals for consideration by the Center for Advanced Study's (CAS) permanent professors. This year, three ECE ILLINOIS faculty members were appointed as CAS Associates and one ECE ILLINOIS professor was named as a CAS Beckman Fellow. They are each granted one semester to pursue their respective projects. 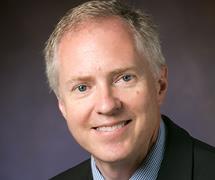 Brian T. Cunningham
Professor Brian T Cunningham will pursue research under his proposal "Digital resolution biosensing, disease diagnostics, and DNA sequencing using dielectric nanoantenna-microcavity hybrids." Cunningham is the Donald Biggar Willett Professor of Engineering, director of MNTL, and affiliated with the Beckman Institute. He received his PhD in Electrical and Computer Engineering from the University of Illinois at Urbana-Champaign in 1990 and has been an Illinois faculty member since 2011. Professor Elyse Rosenbaum's winning proposal is titled "Machine Learning Models for Reliability Analysis." Rosenbaum is the Melvin and Anne Louise Hassebrock Professor in Electrical and Computer Engineering and is affiliated with the CSL. She is a director of the Center for Advanced Electronics through Machine Learning (CAEML). She received her PhD in Electrical Engineering from the University of California, Berkeley in 1992 and has been at Illinois since then. Professor Lynford L Goddard was appointed as a CAS Associate for his proposal "Multi-depth Atomic Layer Etching of Silicon using Photo-Electro-Thermo-Chemistry." Goddard is affiliated with both the Beckman Institute and MNTL. He received his PhD in Physics along with a minor in Math from Stanford University in 2005 and has been at Illinois since 2007. Lav R. Varshney
Assistant Professor Lav R Varshney was named as a CAS Beckman Fellow for his proposal "A Mathematical Theory of Creativity." Varshney is affiliated with both the Beckman Institute and CSL. He receieved his PhD in electrical engineering and computer science from the Massachusetts Institute of Technology (MIT) in 2010 and has been at Illinois since 2014.