A group of Illinois researchers has published cutting-edge research in Nature’s Scientific Reports. The group is comprised of postdoctoral researchers Xiaozhen Wang and Xin Yu, PhD student Tianjian Lu, and ECE ILLINOIS professors Jianming Jin and Lynford L Goddard. Both professors are affiliated with the Beckman Institute. Goddard is also affiliated with the Micro and Nanotechnology Lab. “Diffraction phase microscopy imaging and multi-physics modeling of the nanoscale thermal expansion of a suspended resistor” explores the theory and measurement of how thin-film materials expand in the presence of heat.

“We were investigating how the electrical power is dissipated under coupled thermal, electrical, and mechanical actions by looking at the nanoscale expansion of a resistor,” said Goddard. The resistor in question includes multiple layers of different materials deposited on a silicon wafer. Electric current through the resistor produces heat which is dissipated into the different layers and causes the materials to expand. 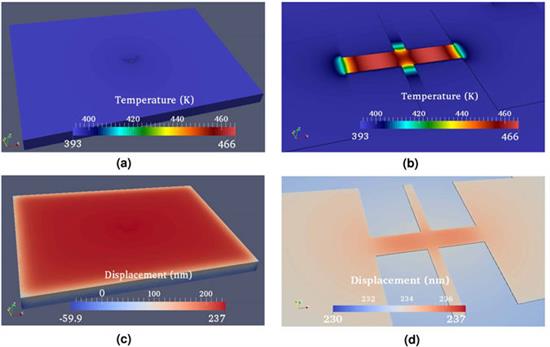 From the paper, simulation of (a) the steady-state temperature profile, (b) its zoomed-in view at the center of the suspended bridge of the resistor, (c) the distribution of the z-displacement profile, and (d) its zoomed-in view, under the input voltage of 2?V.

The team presented parts of their work at the PIERS (Progress in Electromagnetics Research Symposium) conference in 2016 and have been working on the project since 2015.

Professors Jin and Goddard have worked together in the past and co-authored several other papers. “The earliest one was in 2014 where my group was fabricating reflective microring resonators and his group used various computational methods to simulate them accurately,” Goddard said. “Jian-Ming’s group is really good at electromagnetic modeling. However, this was sort of a new area for the students… being able to apply their model to a real-world photonic device”.

“When you think about computing chips, some of the common failure mechanisms that exist are because certain contacts get broken due to thermal or mechanical stress,” Goddard said. “You worry that the solder might melt or that thermal expansion might cause things to separate.” These changes in computing chips occur at the nanoscale.

Goddard and his group have been working on the technique for several years and have adapted it to work with electronic materials to see these small changes. He plans to continue research with diffraction based microscopy and other emerging optical imaging techniques in the future.

The full paper is available online at Nature here.