ECE ILLINOIS and Illinois Archives to open window on cybernetic past

Half a century ago, the University of Illinois Biological Computer Laboratory led by ECE ILLINOIS Professor Heinz von Foerster served as a world-leading center for the bold new science of cybernetics, which applied concepts of control and communication—with special attention to the role of feedback—across the domains of living and nonliving systems. 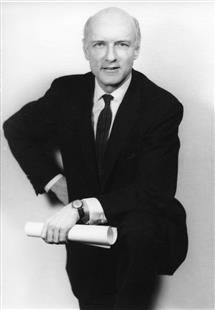 Today, ECE and the University of Illinois Archives are working to enable fresh perspectives on that past.

The National Endowment for the Humanities announced last month that it will fund an Archives-led project entitled, “The Cybernetics Thought Collective: A History of Science and Technology Portal Project.” One task of the year-long venture is to begin digitizing the papers of von Foerster and his Illinois colleague Ross Ashby, as well as those of fellow cybernetics pioneers Norbert Wiener and Warren S. McCulloch. More crucially, the project team will prototype a web portal to network the various collections and enable analysis and discovery.

In addition to ECE and the University Library (home to the Archives), faculty and staff from the Department of Computer Science and School of Art and Design will contribute to the effort. Collaborating institutions are the British Library, home to Ashby’s papers; Massachusetts Institute of Technology, home to Wiener’s; and American Philosophical Society, home to McCulloch’s.

Stephen Wolfram, the founder and CEO of Champaign-based Wolfram Research and a member of the project’s board of advisors, will provide Wolfram Language resources to enhance the functionality of the prototype portal.

“We’re proud to work with the U of I Archives and other distinguished partners in recovering this fascinating era of scientific and technological history, in which ECE-Illinois played a vital role,” said ECE Head William H Sanders. “Von Foerster and Ashby embodied the broad-minded, adventurous spirit of research that still animates us today.”

Von Foerster, Ashby, Wiener, and McCulloch all participated in a series of annual conferences after World War II at which cybernetics was born. Known as the Macy Conferences (because they were sponsored by the Josiah Macy Jr. Foundation), these interdisciplinary gatherings brought together distinguished participants from physics, engineering, medicine, mathematics, social science, and other fields in an effort to bridge the communication gaps among disciplines, thereby opening new approaches to old problems.

The National Endowment for the Humanities and the University of Illinois at Urbana-Champaign together: Exploring the human endeavor

The last Macy conference was held in 1953, and five years later von Foerster opened the Biological Computer Laboratory at Illinois, where the conversations continued until 1975. Among the legendary cybernetic machines built in the lab were an artificial eye, ear, and brain. Biologists Humberto Maturana and Francisco Varela, along with ECE Emeritus faculty member Ricardo Uribe, developed their theory of autopoiesis largely in conversation with von Foerster at BCL. And the lab evolved into a hive of the campus counterculture, with popular “Heuristics” seminars providing a forum for students across campus to vent, engage, and discover.

“This grant will afford us the unique opportunity to explore connections between these four individuals—Heinz von Foerster, W. Ross Ashby, Warren McCulloch, and Norbert Wiener—and to better understand how they influenced each other and the context in which their ideas evolved. It will also enable us to shed light on hidden connections between documentation within their research archives,” said Project Director and Lead Principle Investigator Bethany Anderson. “We are excited to see where these connections take us and are grateful to the NEH for its invaluable support for this ambitious project.”