Nearly all election forecasting models predicted a Clinton victory on election night, but two ECE ILLINOIS students got it right. Since June 2016, Tweetsense co-founders William Widjaja and Cody Pawlowski were predicting that Trump would be the next President.

Cody Pawlowski (left) and William Widjaja (right), co-founders of Tweetsense
Tweetsense has already attracted media attention for accurately predicting the 2015 Chicago mayoral election, the Brexit vote, and the nomination of Donald J Trump. Tweetsense, a sentiment analysis startup, uses social media and other areas of internet content to understand public opinions. The difference between Tweetsense and other election forecasting models is their ability to analyze sentiment or emotion behind certain voices instead of keyword analysis.

“In order to fix the polling industry, we need to take a totally different approach," Widjaja told ChicagoInno. "We need one that sort of throws everything out the window altogether."

That kind of drastically different approach is exactly what the duo did as they analyzed up to 20,000 sentences per day from social media sites such as Twitter, Facebook, and Reddit during the presidential campaign. The team used this data to predict the direction in which citizens were leaning instead of relying on public participation in polls. They plan to continue their research to help improve the polling field.

"The method of using sentiment is robust enough to work on any kind of future kind of election," Widjaja told ChicagoInno. "And not just elections but also for anyone who wants public opinion.” 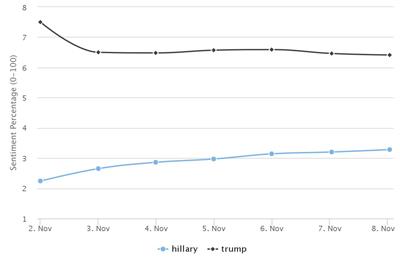 Another data analytics team, Election Analytics @ Illinois, attracted headlines earlier this fall for predicting that Donald Trump had a "0% chance of winning the election.”

This team, led by ECE ILLINOIS affiliate and professor of computer science professor Sheldon Jacobson, has also had an impressive record of accurate election forecasting. The team accurately predicted 49 out of the 50 states in the 2008 and 2012 presidential elections. As of the morning of this year’s vote, the team predicted that Clinton had a 99.2% probability of winning the presidency. However, Jacobson explained that their forecasting model neglected to acknowledge the large amount of undecided voters and what their impact on the election results could be.

Political pollsters and election forecasters are only able to work off the data they have or the voters who publicly announce who they plan to vote for. This means that the pollsters and forecasters did not know who the undecided voters or those who did not indicate their preference were going to support on Election Day.