Documentary on Professor Nick Holonyak Jr. and the LED premieres on BTN in July

In late July the Big Ten Network will air a documentary on Nick Holonyak Jr. and the invention of the LED.

Some refer to ECE Professor Nick Holonyak, Jr as the “Godfather” of light-emitting diodes (LEDs), but that was only one his many contributions to modern electronics. A new documentary, A Brilliant Idea: Nick Holonyak and the LED, will premiere on the Big Ten Network on July 28 (7:00 a.m. CST, repeats August 2 at 4:00 p.m. CST).

“Nick’s scientific career of almost six decades has changed the world,” explained Ilesanmi Adesida, dean of the College of Engineering. “Everywhere you look, we all interact with Holonyak’s inventions daily.” Technology advances in lasers that run CD and DVD players and fiber-optic communication networks, and ground-breaking transistor research can all be traced back to his laboratory at the University of Illinois Urbana-Champaign. 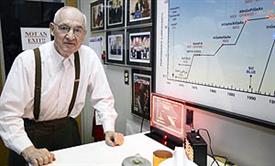 Nick Holonyak Jr. in his office at the Micro and Nanotechnology Laboratory. The chart to the right illustrates the LED's developmental timeline.

Born in 1928, the son of an immigrant coal miner in southern Illinois, Holonyak’s story reflects the American Dream. He left the promise of back-breaking work on the Illinois Central Railroad to become the first in his family to attend college. He earned his bachelor’s (1950), master’s (1951), and PhD (1954) degrees in electrical engineering from the University of Illinois, where he was the first graduate student of John Bardeen, two-time recipient of the Nobel Prize in Physics and the co-inventor of the transistor.

After completing his studies at Illinois, Holonyak joined the GE Advanced Semiconductor Laboratory in Syracuse, New York, where he is credited with the invention of the dimmer switch, the first visible semiconductor laser (GaAs phosphide), and first (red) LED. He returned to the University of Illinois as a faculty member in 1963. His research has led to the practical development of the quantum well laser—making possible lasers for fiber-optic communications and the Internet, CDs, DVDs, medical diagnosis, surgery, ophthalmology, and many other applications—along with improvements in vertical cavity surface-emitting lasers, and most recently, the transistor laser. He continues to conduct research in the Micro and Nanotechnology Lab.

As the John Bardeen Endowed Chair in Electrical and Computer Engineering and Physics, Holonyak is one of only 13 Americans to have won both the National Medal of Science (1990) and the National Medal of Technology (2002). In 2004, he won the Lemelson-MIT Prize—the world's largest single cash prize for invention. He was inducted into the National Inventors Hall of Fame in 2008. His other awards include the John Scott Medal (1975), Charles Hard Townes Award (1992), National Academy of Sciences’ Award for the Industrial Application of Science (1993), Japan Prize (1995), Frederic Ives Medal (2001), Global Energy Prize from Russia (2003), IEEE Medal of Honor (2003), and Laureate of the Lincoln Academy of Illinois (2005). In 2010, Holonyak, and his mentor John Bardeen, were among the inaugural class inducted into the Engineering at Illinois Hall of Fame.

UPDATE AUGUST 5, 2011: The documentary can now be viewed here.