At music venues today, electronic artists play with an extraordinary variety of styles; concertgoers might bob heads in tune to minimalist, mellow “chillwave” or dance to the beats of upbeat house music.

Stepping back more than 50 years, however, the first electronically-generated pieces were taking shape at electronic music studios across the world, and they sounded very different.

Illinois School of Music composer Salvatore Martirano composed an early example of this type of music in 1965 called “Underworld,” a disquieting, atmospheric piece full of chaotic howls and whimsical melodies. He did so using an instrument called the Harmonic Tone Generator. 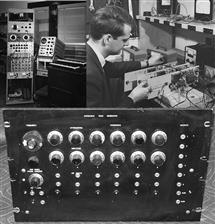 Just a year prior in 1964, now-Professor Emeritus James W Beauchamp (PhD '65) invented the machine as part of his PhD project in electrical engineering.

Early in 2015, the University Library’s Sousa Archives and Center for American Music acquired Beauchamp’s instrument in order to preserve it. On Sept. 21, it opened an exhibit, “James Beauchamp and the Harmonic Tone Generator,” to allow visitors to learn about the legacy of electronic music at Illinois. The exhibit runs until May 27, 2016. Beauchamp and Smart will also discuss the original instrument and Smart's recreation at a talk at the Sousa Archives at noon Nov. 11.

When Beauchamp first built it, the Harmonic Tone Generator was one of the country’s first voltage-controlled music synthesizers. It used specific voltages to create audio sine waves, which could then be mixed together to make distinct tones. Users could manipulate how much “attack” or “decay” the sounds had, allowing them to control how fast the sound rose to its peak, and how long it took to fade. They could also adjust amplitude, frequency, and other metrics to create all kinds of distinct tones and musical progressions. By combining all of these options, anyone sufficiently experienced with the machine could create entire compositions based on the synthetic tones.

The old and new instruments housed at the Sousa Archives (left), and Beauchamp and other professors accepting a sponsorship check from a MagnaVox executive (right)

“Listening to musical instruments, we can see that the sounds they make are composed of certain basic harmonic frequencies,” Beauchamp said. “I built this machine to emulate those sounds virtually, to recreate musical notes with a synthesizer that has harmonics you can control.”

Beauchamp created the instrument under the direction of composer and Illinois’ Experimental Music Studio founder Lejaren Hiller, who, in 1957, co-created with Leonard Issacson the first piece composed entirely by computer, the Illiac Suite. After Beauchamp finished the instrument, some of Illinois’ foundational contributions to the beginnings of electronic music were composed by Hiller, Martirano, and Herbert Brün using his instrument as a primary sound source. These first forays into electronic composition were high-level teasings of musical theory on a virtual plane, applying the techniques of instrumental composers to synthetically produced sounds. The synthetic music that emerged from experiments like these would evolve and expand in popularity, morphing into the sweeping electronic symphonies of artists like Jean-Michel Jarre and Vangelis in the '70s, and finally fragmenting into the myriad genres of today’s DJ scene.

Smart, while doing research on electronic music, came across Beauchamp’s seminal thesis and other articles, and decided to try to recreate the machine in his spare time. He emailed back and forth with Beauchamp at first, and set to work reconstructing Beauchamp’s machine, tone for tone. The two stayed in touch throughout Smart’s construction process, with Smart continually sending Beauchamp sounds to critique so that the digital tones that his machine generated would accurately recreate those made by the original.

Smart used Native Instruments’ Reaktor program to create the software side of the HTG emulator.

“I like to describe Reaktor as synthesizer legos” Smart said while demonstrating his machine at a session in ECE’s Electronic Music Lab. “You can create any synthesizer you can dream up as long as you’ve got the processing power and the patience.”

Smart constructed a basic software emulation of Beauchamp's original instrument in a weekend, which was eventually expanded and loaded onto a laptop. He wired the laptop to a set of circuit boards connected to the controls for setting attack, delay, frequency, and other settings, and a piano-like keyboard, similar to the one on the original device.

Scott Schwartz, Archivist for Music and Fine Arts and Director of the Sousa Archives, was already in touch with Beauchamp regarding his work at the experimental music studio, and the two agreed to house the old instrument at the Sousa Archives for preservation. Beauchamp mentioned to Schwartz that Smart was beginning to reconstruct his work. As a result, the Sousa Archives funded Smart’s reconstruction project. Schwartz also built an imitation rack to house Beauchamp's instrument as it would have looked in the original studio and a wooden frame for Smart’s new device, constructed in harmony with the original instrument’s aesthetic.

“After being housed for about 25 years in the Illinois' Experimental Music Studios, the device was given back to me and it sat under my workbench at home for another 25 years. Then, Scott Schwartz notified me saying he was interested in preserving it,” Beauchamp said. “Mark worked very hard on recreating the original generator, and it’s very gratifying to see his efforts converged into such an excellent solution.”