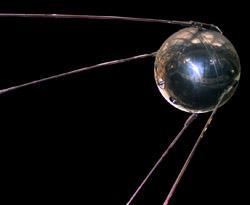 A model of Sputnik created by NASA.

Fifty years ago this fall, ECE Professor Emeritus George Swenson found himself caught up in the frenzy of scientific and technical activity surrounding the Soviet launch of Sputnik I, the first man-made satellite.

Though he had been planning to track the proposed American satellite during the International Geophysical Year (1957-58) and had been thinking about ways to do it, Swenson, like just about everybody else on October 4, 1957, was surprised by the news of Sputnik. Nevertheless, he and his Illinois colleagues responded resourcefully and managed to publish some of the earliest orbital data about Sputnik I in the November 9, 1957, issue of the prestigious British science journal Nature.

The brief publication was the first of many professional accomplishments that Swenson attributes, directly or indirectly, to Sputnik. Both he and the ECE Department are perfect examples of how the beachball-sized satellite changed the world.

Riding the post-Sputnik boom
"I wasn’t thinking about any impact at the time," recalled Swenson. "I was thinking about the science we could do with this thing." Within a night or two of the launch - after having tracked Sputnik continuously with the help of energetic graduate students and local amateur radio enthusiasts - Swenson and fellow ECE professor Edgar Hayden could see that the satellite’s signal would convey valuable information about the ionosphere. Indeed, Sputnik provided researchers the first monochromatic, distinctly polarized, radio signal transmitting at a known frequency through the ionized parts of Earth’s upper atmosphere.

Swenson and ECE got in on the ground floor of what quickly became a booming business: satellite-based atmospheric research. K. C. Yeh would join the faculty in 1958, devoting himself full time to such research. Later, C. H. Liu would join the faculty in the same area. ECE’s long-established
Remote Sensing and Space Sciences laboratory is the prestigious legacy of these early hires.

Swenson parlayed his early paper on Sputnik I into his first big grant, $62,000 from the National Research Council for further scientific exploitation of Soviet satellites, and more money would flow from NASA, the Air Force, and other agencies as the United States’ own satellite program kicked into gear. Swenson and colleagues built their first satellite payload, a beacon transmitter they named "Nora Alice," for the U.S. Discoverer satellite series. 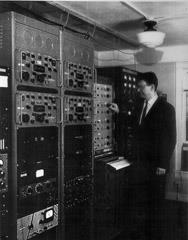 Swenson and Yeh would go on to publish the first papers reporting actual atmospheric science done using satellite signals. And Swenson even put his satellite successes to work in advancing his career in radio astronomy, the original reason for his joining the ECE and Astronomy faculties in 1956. "I was very naïve about research at the time," said Swenson, "and I didn’t know how to go about finding funds. " When they [funding agencies] began seeing my name and names of colleagues around here, that helped a lot." With his newly acquired connections and skill at dealing with Washington, DC, Swenson established a successful radio astronomy program at Illinois with the Vermilion River Observatory.

The next 50 years: Boon or boondoggle?
When asked where the Space Age will go from here, Swenson says, "I’m afraid the politicians have got a hold of the whole thing, and the next 50 years are going to be based on politics rather than science."

"My skepticism is based in part on the fact that so many stunts were pulled in the name of science. Landing on the moon was a great stunt, but we didn’t learn much from it. We learned how to put men in space, but we don’t learn much from having men in space - certainly not in the realm of physical science, at least. It’s far better to have robots in space."

"The international space station is the biggest boondoggle that’s ever been undertaken," Swenson continued. "The people who are benefitting from it financially and psychologically will tell you, ‘Oh, we’re learning a lot. We’re learning how to keep a man alive in space.’ Well, man doesn’t belong in space. Man evolved to live on the earth." 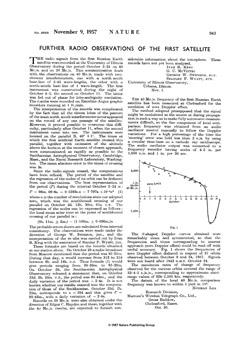 Early orbital data about Sputnik I was published in the journal Nature by ECE Illinois Professor Emeritus Swenson and Illinois colleagues on November, 9 1957.

One current Space Age project that wins Swenson’s approval is the privately funded Search for Extraterrestrial Intelligence (SETI) Institute, which uses advanced computational techniques to analyze data from space and is now building the Allen Telescope Array in California. Swenson considers himself a skeptic about the prospects for human communication with extraterrestrial intelligence, although he did serve from 1980 until 1990 on a working group that advised NASA on the issue.

"The committee was balanced between skeptics and true believers," recalled Swenson. "I was a skeptic. I didn't think we knew enough to devise a rational search strategy. So if a signal came in from an unequivocally intelligent source, I thought it was just as likely to be discovered by an astronomer doing his regular thing as by a group doing a purposeful search." Congress cut the NASA program in 1993, but Swenson continues to follow the work of the SETI Institute. "A small coterie of bright minds working on the problem is worthy of support," he said.

Even if SETI fails at its ultimate goal, the Allen Array will yield benefits for radio astronomy, according to Swenson. "It’s going to be the prototype for every big radio telescope of the future, I would say."

Read more about Sputnik and its aftermath in Swenson’s "At the Dawn of the Space Age."