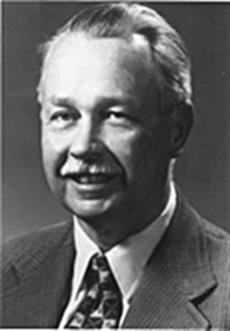 Dr. Van Valkenburg joined the faculty at the University of Illinois in 1955. From 1966 to 1974, he served as professor and head of electrical engineering at Princeton University before returning to the U of I. In 1982, Van Valkenburg was named to the college's first endowed chair known as the W. W. Grainger Professorship. In 1984, he was appointed Dean of the College of Engineering. During the 1980's, Mac helped steer the institution to national prominence during a "renaissance in engineering."

He was author of seven textbooks. A member of the National Academy of Engineering, Van Valkenburg received the Lamme Medal, the highest honor of the American Society for Engineering Education; the George Westinghouse Award from the same organization; the Education Medal of the Institute of Electrical and Electronics Engineers; and the Halliburton Engineering Education Leadership Award of the UI engineering college.

In 1986 a fund was established on the occasion of the 65th birthday of Mac Van Valkenburg, with income from the fund to be used to provide a fellowship in his honor. Mac Van Valkenburg symbolizes the highest quality of engineering education in Illinois and, indeed, in the country. The award, which is given annually to one or two outstanding PhD candidates, carries a minimum $5,000 stipend.

The online application form will be advertised on My.ECE. A complete application should consist of the student’s resume, his/her list of publications, and 2 letters of recommendation (one from the research adviser). Applications will be due in November.