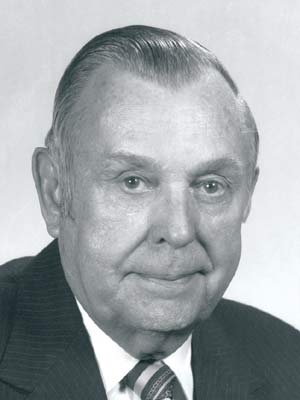 M. Stanley Helm was born on Oct. 28, 1911, in Decatur, Ill. He started his career at the UI as an instructor in 1938 after gaining four years of experience in illumination at Illinois Power Company and motor control at Midstate Electric Company in Decatur.

In 1946, Prentice Hall published his book with Carl Skroder "Circuit Analysis by Laboratory Methods." In 1950, he received the EE Professional Degree and continued his career as a Professor of Electrical Engineering. During this time he received numerous teaching awards from the University of Illinois and the electric power industry. His research made contributions to what has now become known as "power quality".

Stan retired in 1982, but continued to be active in the American Power Conference and the IEEE Power Engineering Education Committee. He also continued as the coordinator for the Power Affiliates Program in the Department of Electrical and Computer Engineering. He served on the departmental alumni board from 1970-1995. He was recognized with the UI Loyalty Award and the 1996 Marcia Peterman ECE Award. He was a member of Tau Beta Pi, Eta Kappa Nu, Sigma Xi, and Sigma Tau and was a registered Professional Engineer in the State of Illinois. He died Jan. 21, 2003.

This fund was established in 2002 by alumni and friends of M. Stanley Helm to recognize his many contributions through over 65 years of service (1938-2003) as a faculty member in the ECE department.