The Grainger College of Engineering

Rashid Bashir, Dean of The Grainger College of Engineering at the University of Illinois Urbana-Champaign, has appointed Yurii Vlasov as the next Interim Director of the Nick Holonyak Jr. Micro and Nanotechnology Laboratory (HMNTL) effective August 16, 2021.  The college is working with an external search firm and plans to officially launch an external search for the next director of HMNTL in the coming weeks. The search process is expected to continue through Fall 2021-Spring 2022 with the next permanent director to start in Fall 2022. 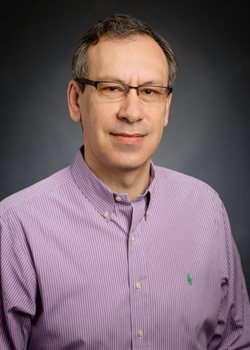 Vlasov is a Founder Professor in the Department of Electrical and Computer Engineering.  He has served on various departmental and college administrative committees, including the college and HMNTL Executive Committees. He has been actively involved in in the department and has a strong rapport with all faculty, staff, and students. Working with the faculty and staff and the previous leadership of HMNL, Vlasov led a strategic visioning for HMNTL that will certainly advance our vision of continuing HMNTL on a trajectory of excellence and impact. has a strong record of research collaborations and success.

Prior to joining our college, he was Manager and Principle Member of Research Staff, IBM Watson Research Center from 2001 – 2006 and also was Senior Fellow at HHMI Janelia Research Campus from 2013-2018. During his various research and managerial positions at IBM Research, he pioneered and led the development of IBM silicon nanophotonics technology that integrates electrical and optical devices on a single silicon chip to enable optical communication using pulses of light as opposed to electrical signals. This disruptive technology, which is deployed for commercial production, is enabling high-performance optical connectivity in hyperscale data centers, as well as in 5G networks, while significantly reducing cost and maximizing energy efficiency. For his contributions, he received the 2012 “Best of IBM” IBM Corporate Award, was elected Fellow of the Institute of Electrical and Electronics Engineers (IEEE) in 2015, and was also inducted into the National Academy of Engineering in the Class of 2021.

At Illinois, his research has been focused lately on development of advanced engineering approaches aimed at reverse engineering of the brain circuits. The major themes include development of silicon-based nanofluidic and nanophotonic implantable neural probes, in-vivo neurobiological experiments with massive recording and manipulation of brain activity, and, lastly, development of machine-learning algorithms to analyze these large neural datasets.