There’s no one explanation for career success — often some product of ingenuity and industriousness — but for ECE Professor Emeritus [profile:s-chuang], who passed away March 26 after an extended battle with cancer, part of the explanation has always been relational.

He was beloved by students and faculty alike, known for his affable and generous personality, which endeared him to those he mentored, as well as to the researchers 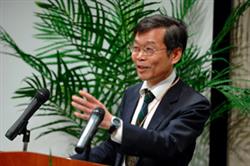 Shun Lien Chuang
he collaborated with, both here and at peer institutions. That network of relationships was broadened further by several sabbaticals Chuang took, spanning the globe from Germany to Tokyo throughout the course of 30 years as an Illinois faculty member.

At Chuang’s investiture as the Robert C. MacClinchie Distinguished Professor in Electrical and Computer Engineering in 2007, his friend and colleague Professor Weng Cho Chew addressed the audience.

“Like all good scholars, he is also a great and exemplary teacher,” Chew said. “He is the only teacher I know whose students stand up and clap at the end of the semester.”

“The thing that struck me the most about Shun Lien during my first days in ECE was this amazing level of excitement and happiness,” Cangellaris said. “His presence brought people together. His absence will be difficult to fill.”

Beyond direct relationships like those, Chuang is esteemed for authoring a leading textbook on the physical theories that govern photonic devices like lasers, photodetectors, modulators, and so forth. It was first published in 1995 as Physics of Optoelectronic Devices (Wiley) and was renamed for the second edition, published in 2009, as Physics of Photonic Devices (Wiley).

Almost two decades of electrical engineering students across the country — here at Illinois and also at peer institutions like Stanford, Harvard, and Massachusetts Institute of Technology — have learned the intricacies of these devices through Chuang’s comprehensive treatment.

Late last year, Chuang recalled that after speaking at Intel, a number of engineers came to meet him afterward.

“They came to listen to me, do you know why?” Chuang said. “They came because they liked my book, even though it’s a difficult book.”

The work that underlies that textbook began as a course that Chuang first developed in 1984, his second year as an Illinois faculty member. After 10 years of teaching the course — Integrated Optics and Optoelectronics (ECE 536, formerly 436) — Chuang compiled the material into the first edition.

Chuang’s research, like the textbook, was a combination of electromagnetics and optoelectronics. With two collaborators, Chuang developed a new type of optoelectrical device known as intraband cascade detector, which was patented in 2004. These are capable of detecting infrared radiation and have been incorporated into night-vision equipment. The device is based on an alternating heterostructure known as a type-II superlattice.

Over the ensuing decade, Chuang continued to research detectors based on this structure, and, at the time of his death, he was leading a multi-institutional team that focused on enhancing these devices.

Chuang was also working on a current project with researchers at the University of California, Berkeley, which aims to develop a small optical pulse radar by integrating different kinds of optoelectrical devices — including lasers, detectors, and modulators — onto a silicon substrate.

Chuang retired from his official teaching responsibilities in 2012, due to health concerns, and moved to the Bay Area. Even so, he continued to research as a professor emeritus of this department, conducting those projects at Stanford University, where he was visiting professor. There are five current PhD students still in his lab.

“Shun Lien had an indomitable spirit and a great and endearing sense of humor,” Chew said. “Even when he was battling with cancer, he always had amusing anecdotes and jokes to share with his colleagues and friends.”

For Chuang, one of the greatest pleasures of moving to the Bay Area was the high concentration of former students. His own career was sparked by a friendship with ECE Professor Kung-Chie Yeh, who became a mentor after visiting Chaung’s undergraduate alma mater, the National Taiwan University, in 1976. More recently, many of Chuang’s former students would come to visit him, especially when he was first convalescing in 2012.

“I had visitors every week,” Chuang said late last year. “A lot of alumni came to see me to cheer me up ... those students who took my class.” At that point, he would hear success stories from the next generation that, like his own, involved a catalytic mentor and teacher. Only, in the case of their stories, that individual was Chuang.