"The work itself is the pleasure": Plaque honors ECE Professor Nick Holonyak On September 18, 2009, a ceremony was held at the Micro and Nanotechnology Laboratory (MNTL) of the University of Illinois to unveil a plaque honoring the achievements of ECE Professor Nick Holonyak, Jr.

Holonyak, the John Bardeen Endowed Chair in Electrical and Computer Engineering and Physics, received his bachelor’s, master’s, and PhD from Illinois in 1950, 1951, and 1954, respectively. He developed the first visible spectrum light-emitting diode (LED) while working at General Electric in 1962. He joined the University of Illinois faculty in 1963. He has gone on to develop the quantum well laser, improvements for vertical cavity surface-emitting lasers, and most recently, the transistor laser.

“This is an occasion to remind ourselves of the excellence that people before us have created,” said College of Engineering Dean Ilesanmi Adesida in his remarks. “We owe you a lot, Nick. I assure you that we admire your tenacity, your passion, and your straightforwardness in all you do.” 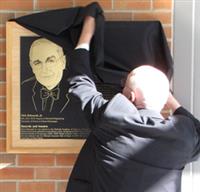 ECE Department Head Andreas C Cangellaris described Holonyak as embodying the ancient Greek ideal of a “citizen of the world.” Cangellaris explained, “In ancient Greece they used to say, ‘Most distinguished are those who desire, not to be admired by people, but to serve the people.’ Or in Nick’s words, ‘It’s ridiculous to think that somebody owes you something.’”

After unveiling the plaque, Holonyak said, “I thought when I came, I could just say, ‘Thank you,’ and then we could go on with what we do.” Holonyak commented that, though the awards he has received over the course of his career have been nice, “the work itself is the pleasure. Everything else is just something you can talk about.” 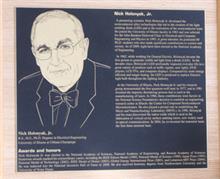 The plaque is located in the atrium of the Micro and Nano Technology Laboratory.

Last year a symposium was held at the University to celebrate Holonyak’s 80th birthday.