Illinois ECE affiliate faculty member and director of the Field Robotics Engineering and Sciences Hub Girish Chowdhary was recently featured on a OneZero article, highlighting his work with his startup EarthSense. EarthSense sells an autonomous agriculture robot that Chowdhary developed to phenotype plants for breeders.

With companies like Tesla and Uber leading the charge for autonomous transportation vehicles, people are overlooking the use of autonomous vehicles for farming which faces fewer tech barriers and could potentially be just as important. 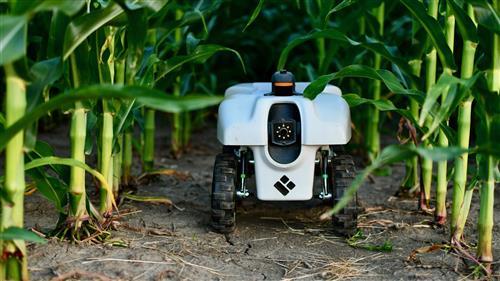 Chowdhary's autonomous agriculture robots (photo cred: OneZero/EarthSense)
Giant farming tractors can cost as much as $600,000 but treat an entire field indiscriminately, spreading pesticide or fertilizer on every inch of soil, regardless if that inch benefits from the chemicals or not. "The challenge with agriculture is that the environment can be very different in different fields,” Chowdhary said. “Hence, the only way to ensure that the robot autonomy is robust is to expose the algorithms to many different situations.”

By using small, autonomous tractors, labor and fuel costs for farms can be significantly mitigated and impractical practices such as "precision agriculture" in which farmers diagnose and cultivate plants individually, can be eliminated. "Harvest the field’ or ‘find which crop is sick," said Chowdhary. “This is a more well-defined task than ‘take my kids to school." Girish Chowdhary
Chowdhary said that he defines "his phenotyping tractor’s autonomy at level one, according to his own roadmap, which he based on the level of human involvement required to get the job done." “It doesn’t cook breakfast,” he said, “but it can go through the rows of corn by itself.”

According to OneZero, he hopes to achieve level two next year, when a single human will be able to supervise many robots. What he would consider “fully autonomous,” a level 4 on his scale, is that the robots would maintain a field on autopilot throughout a whole growing season.

“I wouldn’t say there is full autonomy,” he says of swarm farm robots. “but I would say that the path to full autonomy is unhindered in cornfields.”