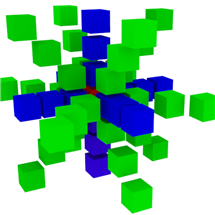 It may seem like artists and engineers don’t have a lot in common, but they both use stencils to improve the efficiency of their work. Researchers in high-performance computing often use 3D stencils, a method of measurement embedded in computer code, when simulating, for example, turbulent fluids in stars such as the Sun. However, while graphics processing units (GPUs) can quickly perform the calculations, they are not particularly efficient at accessing data in memory and that is a challenge when a data point may need to be recalled many times – such as during use of stencils to create a 3D model.

Omer Anjum
Illinois ECE postdoc Omer Anjum, a member of the IMPACT group led by Illinois ECE Professor Wen-mei Hwu, recently wrote a paper on his work on high-order stencils titled “An Efficient GPU Implementation Technique for Higher-Order 3D Stencils.” The publication, which outlines a method of reusing data inside a GPU to improve bandwidth, received a “Best Paper Award” at the International Conference on High Performance Computing and Communications (HPCC).

“A stencil [in computing] can be used when you are calculating a point in space. In order to create a reference point, you need to look at its neighbors,” said Anjum, a postdoc in electrical and computer engineering and computer science. “The stencil defines the points in the neighbors that you want to use when modeling an unknown point in space.”

For example, a researcher who wants to simulate a fluid must observe the neighboring temperatures and pressures in order to understand how those quantities affect the fluid at a point in space. The algorithms currently used to analyze such information are extremely inefficient because they require a large memory footprint inside a GPU. While GPUs can perform computations on data very quickly, their bandwidth for accessing memory data is small compared to their arithmetic calculation speed, creating issues like underutilization of computing resources. That creates a need for algorithms that are highly efficient in their reuse of data, but the previously existing algorithms for stencils have fallen short.

“Our method increases data reuse so once you have the data inside the GPU, it is reused as much as possible so the bandwidth requirement is reduced,” said Anjum. “This research has applications that require processing exabytes of data. If you want to simulate the Sun or stars and space, our methodology identifies how much data needs to be processed, with each data point potentially reused many times.” Wen-mei Hwu
This work on high-order stencil algorithms has enabled high-fidelity solutions to run significantly more efficiently on GPUs. Such high-fidelity solutions are critical in the design and evaluation of turbulent fluids and the study of space weather due to solar activities. When simulating complex fluid mechanics, researchers could analyze the Sun’s convection zone, which is presumably responsible for creating its magnetic field, and predict space weather, or the weather around the Sun. That would ultimately allow scientists to predict the weather on the Earth with a higher level of precision.

The computing community understands the importance of the problem and this research’s potential to solve it. HPCC’s award committee recognized the uniqueness of Anjum’s algorithm and approach, and honored him with their Best Paper Award.

“It’s a big success,” said Anjum. “This is my first paper published at the University of Illinois as a postdoc, and getting this award is a big achievement, setting the bar very high for me.”

Currently the research team is planning to expand the work to be applicable on a larger scale, and they will eventually collaborate with scientists across the campus and the country.

Coauthors on this work included Simon Garcia de Gonzalo, Mert Hidayetoglu, and Wen-mei Hwu. Hwu is affiliated with the CSL.