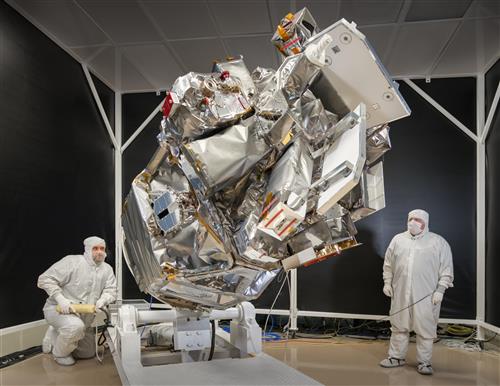 NASA's Goddard Space Flight Center
The Ionospheric Connection Explorer (ICON) mission launched on Oct. 10 from the Cape Canaveral Air Force Station in Florida, and some of the data it collects will be the result of work done at ECE ILLINOIS and The Grainger College of Engineering.

This is where so-called space weather meets Earth weather, and the relationship between the two has yet to be fully understood. It is also where GPS and radio communication signals travel, and when there are variations in weather, it can affect these systems. Jonathan J. Makela
“The data collected by ICON will help us come to a more detailed understanding of the coupling between the different regions of the atmosphere,” ECE ILLINOIS Professor Jonathan J Makela said. “The longer reach is to be able to not only understand those coupling mechanisms, but to improve models of the upper atmosphere so that we’re able to come to a point where we can do better forecasting and prediction.”

Two of the four instruments aboard the mission had their inversion algorithms written by Grainger engineers, making them responsible for two of the data products. ECE ILLINOIS faculty Makela, Gary R Swenson, and Farzad Kamalabadi, along with several graduate students, were involved in the development of these algorithms.

Brian Harding began working on the project as a PhD candidate. He has since earned his degree and is working on the project from his position as an Assistant Research Physicist at the University of California, Berkeley. Harding wrote the algorithms for Michelson Interferometer for Global High-resolution Thermospheric Imaging (MIGHTI) instrument. MIGHTI measures the speed and temperature of particles in the neutral atmosphere.

By working with the US Naval Research Laboratory, which built MIGHTI, Harding’s work will turn raw data into useable information for scientists.

“This is the first NASA spacecraft launched to study ionosphere-thermosphere interactions in over a decade,” Harding said. “Everyone is really excited about that and I’m honored to be producing one of the 10 or so ICON data products.“

Another data product made possible by Illinois is the Far Ultra-Violet (FUV) instrument. Farzad Kamalabadi
Kamalabadi, Kung Chie and Margaret Yeh Endowed Professor in ECE, and a co-investigator on the mission, is responsible for the algorithms and software for the FUV instrument. Built by UC Berkeley, FUV captures images of the upper atmosphere and ionosphere in wavelengths of far ultraviolet light.

Working on a NASA mission like ICON, where they are looking for information rather than trying to prove a hypothesis, is interesting for Kamalabadi.

“I would say the most exciting aspect of ICON mission is the potential for discovery,” Kamalabadi said. “The potential for stumbling upon something that is unexpected or may initially be counterintuitive.”

After the launch, it will take some time before significant information is learned, but it’s worth the wait after years of work.

“There’s a lot of excitement,” Kamalabadi said. “Excitement is natural just because you’ve put so many years into it and you want to make sure it’s successful. There’s anxiety, but if things go well there is excitement of actually seeing the product of what you’ve been working on and how it might reveal or unravel interesting mysteries.” Gary R. Swenson
“It feels especially gratifying to see this one go,” Swenson said. “I’m very proud of the contributions made by the group and we are all anxious to see the benefits of the investments.”

With the information from these instruments working together, researchers will have a better understanding of the ionosphere and upper atmosphere, but the true implications are much larger.

“In addition to our primary science mission, that I have no doubt that we’ll accomplish, this is just going to open the door for so many different side studies,” Harding said. “At the last conference we were at, there was a session on what we might be able to do with ICON … and the room was packed with people interested in getting their hands on those data. It’s going to do a lot of good.”

More information about ICON can be found here.