A “cyberoctopus” may sound like a superhero, but it is actually the focus of the recently announced multidisciplinary university research initiative (MURI) award led by ECE ILLINOIS Assistant Professor Girish Chowdhary. The project, funded by the Department of Defense (DoD) Office of Naval Research, is looking to advance the frontiers of AI, control, and robotics, by learning from the brain and body of octopuses and other cephalopods. 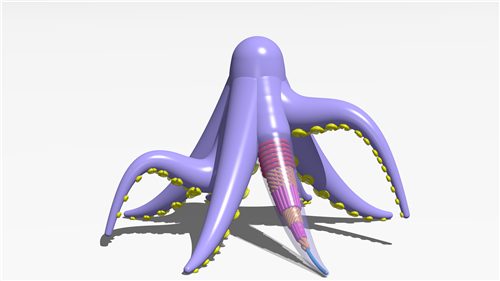 A simulation of the complex muscular architecture of an octopus. (Image provided by Cathy Shih, PhD student from the Gazzola group)

The $7.5 million Multi-university Research Initiative (MURI) award is for building a Cyberoctopus, a software equivalent to the marine animal that will help the team understand and leverage its ability to conduct distributed inference and decision-making, its embodied control and intelligence, and its ability to learn new behavior quickly. 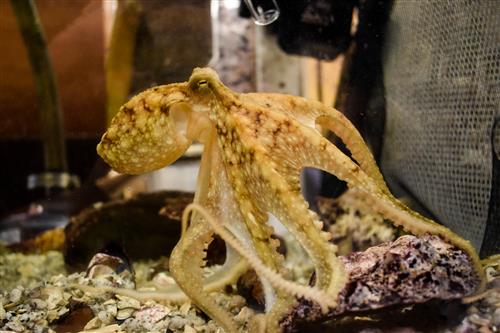 An octopus brain is unique in that it is not centrally located, but instead is distributed across the entire body.

“We believe that bringing autonomy to the next level will require us to learn from animals,” said Chowdhary, assistant professor of agricultural and biological engineering and the lead Principle Investigator of the project. “The octopus is a species with just the right mix of complexity. We believe we can learn a lot from seeing how the octopus learns, evolves, and adapts.”

Inside the octopus brain

First, the group will study the neurodynamics of an octopus. In humans and many other animals, a centralized brain makes a majority of the decisions. In an octopus, most of the “brain” is distributed, not centralized, along the eight arms, meaning each appendage can act independently but also in a coordinated fashion. Being able to control a distributed system like this is a great challenge for modern AI.

“If you look at the neural networks in the brain of an octopus, each neuron is a dynamic system and not a static nonlinearity like some of the artificial neural networks,” said Mehta, also a professor in MechSe. “It will be exciting to understand the role played by neurodynamics in inference, control and learning functions of the octopus brain."

Second, the team will apply principles of embodiment of control and intelligence to the cyberoctupus, leaning on the biology expertise of world-renowned octopus experts, William Kier (Biology, University of North Carolina at Chapel Hill), Gillette,and Gilly.

Gillette has a long track record of studying octopus and cephalopods and has observed them exhibiting a high level of intelligence. Octopuses can open jars from the inside, solve puzzles, and use other animals’ shells as their own. This level of intellect could be beneficial to machines.

“Learning how the octopus intelligence emerges from the seamless interplay between its neural and mechanical, distributed infrastructure is one of the keys to this research,” said Gazzola, also a member of the National Center for Supercomputing Applications.

Gazzola will be working closely with Soltesz to build realistic simulations of the cyberoctopus. The simulations will integrate realistic models of soft mechanics with detailed models of the neural architecture uncovered by the biologists in the team.

How octopuses and squids learn new behavior is the third focus area. Gilly’s research has shown that during the first several weeks of their lives, juvenile squids must learn how to hunt small, planktonic crustaceans to survive. If this skill isn’t developed in this time period, they cannot survive on their own. 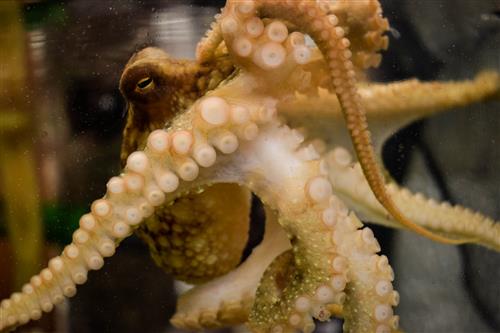 Observing an understanding octopus behavior will be a key aspect of this research.

“This acquisition of behavior that is not preprogrammed, but has to be learned, is fundamental to how animals learn to be intelligent,” said Chowdhary, who also holds appointments with the departments of computer sciences and aerospace engineering. “That’s good because that hints at far more efficient ways of doing reinforcement learning and adaptive control.”

To try and understand the inner workings of an octopus, Rogers is helping build sensor patches that can be embedded inside a real octopus to record neural activity. Rogers has previously installed these patches in mice and other animals, but this is the first time anyone has ever tried to put such patches inside an octopus.

“We did this because we think there needs to be a new stream of thought in AI. We seem to have gotten a lot out of the current deep learning thinking, there’s a lot of merit to that, but how do we go beyond its limitations?” Chowdhary explained. “Research gets done when people get out of the box.”