A new invention developed by an ECE ILLINOIS team is creating new possibilities for the use of offshore wind as a competitive source of energy. The team’s award-winning system is set to make this critical renewable energy resource more attainable and cost efficient, producing significant environmental benefits. Harvesting energy from the wind blowing over the ocean has the potential to generate electricity twice the current demand of the U.S. Offshore wind speeds are generally faster and steadier compared to wind on land.

“Offshore wind energy can enhance our energy and economic security with substantial environmental benefits. Thousands of gigawatts of off-shore wind power are available along the US coastline. Making offshore wind cost competitive enables reduction of our dependency on fossil fuels,” Huynh said. Phuc Thanh Huynh
Banerjee and Huynh’s proposed system would allow offshore wind to become a competitive source of energy through energy cost reduction, which is accomplished through an integrated generator-rectifier architecture.

The proposed system is constructed using a few active power devices and drastically reduces the need for bulky filter capacitors even when processing megawatts of power. The system is designed and controlled to make the power electronics play the role of the filter element in addition to a power processing element. The significant reduction in the number of active power devices and capacitors allows the system to have lower cost, higher conversion efficiency, and higher reliability compared to the state-of-the-art. 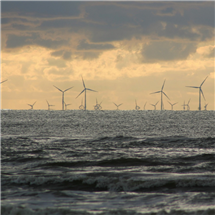 Banerjee and Huynh used offshore wind in their award-winning system as a competitive source of energy
“From an energy-conversion perspective in offshore wind turbine, a small increase in wind speed results in a massive increase in electricity generation. A steady wind speed allows near-constant power delivered to the electric grid. These features make the construction of megawatt-scale offshore wind farms highly attractive to meet our ever-increasing demand for steady and green electricity,” Huynh explained.

This research has been partially supported by the Grainger Center for Electric Machinery and Electromechanics.

The paper “Active Voltage-Ripple Compensation in an Integrated Generator-Rectifier System” will be available in IEEExplore.