Patrick Su
A team of ECE ILLINOIS researchers has been been recognized for their discovery of new methods to tailor impurity-induced disordered VCSELs for high-power single-mode performance. The team’s award-winning work aims for high-power single-mode VCSELs that form coherent beams transmitting over a long range to be used in optical sensing applications such as LIDAR and 3-D imaging applications through the application of Impurity-Induced Layer Disordering (IID).

IID was first discovered at the University of Illinois at Urbana-Champaign by Professor Nick Holonyak, Jr and Dr. W. D. Laidig in 1981. They recognized that by diffusing Zinc into a discrete AlAs/GaAs superlattice, the diffused regions would intermix thus resulting in AlGaAs bulk material. These phenomena had technological breakthroughs that would later on be used for electrical carrier and optical mode confinement that resulted in lower thresholds and higher-output powers. 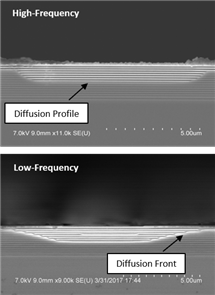 High-Frequency and Low-Frequency IID Aperture Profiles
“The lack of a method to modify the diffusion front that would lead to undesirable encroachment towards the fundamental mode during deep disordering experiments motivated us to find a method of tailoring the IID aperture,” Su said.

Prior to diffusion, a dielectric mask is deposited and patterned to selectively diffuse selective aperture sizes.  The research team discovered that by modifying the diffusion mask strain, they could tailor the diffusion front profile. This can be extended into a wafer-scale process that presents a manufacturable method of tailored impurity-induced disordered VCSELs for high-power single-mode performance.

“The significance of being able to fine tune the impurity-induced disordering aperture is that it enables the flexible design of IID VCSELs for high-power, single-mode, or both,” Su said.

The research team is currently being supported by the II-VI Foundation to continue and explore different IID VCSEL designs for high-performance VCSELs through utilizing various tailored IID apertures.

The team would like to thank Dr. Thomas O'Brien (Ph.D, 2017) (now at Intel) for his contributions to this research and nomination process. “Without his mentorship and guidance, this work would not have been nearly as successful as it has been and the authors are tremendously grateful for his outstanding work,” Su emphasized.

This research is supported by the II-VI Foundation, 4CeeD DiBBs (Grant NSF ACI 16-59), and E2CDA-NRI, a Semiconductor Research Corporation program sponsored by NERC and NIST under Grant NERC 2016-NE-2697-A, and in part by the National Science Foundation under Grant ECCS 16-40196.