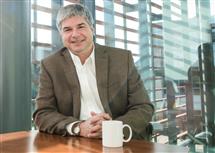 Sanders, who has directed two campus-wide research centers during his more than 20 years in Urbana-Champaign, began his new role August 16 in a designate capacity, pending approval by the Board of Trustees at its September 27 meeting. Killeen said Sanders will be in charge of all aspects of launching and operating Chicago-based DPI, which will be the cornerstone of the Illinois Innovation Network (IIN), a virtually connected network of regional hubs that will spread the institute’s impact across the state.

"Bill is an acclaimed educator, innovator and administrator," Killeen said. "He shares our vision of the power that DPI holds to foster the pioneering innovation that creates new businesses, new jobs, and new waves of progress for the people of Illinois and beyond."

Sanders called the chance to build upon and make real the vision for DPI a "once-in-a-lifetime opportunity." He said he is committed to fulfilling DPI’s promise of becoming a new model for higher education that combines the strengths of industry, academia, and government in a new way that drives both academic discovery and economic growth.

"DPI will harness the unique strengths and scale of the U of I System universities – together with academic and industry partners from Chicago, the state, and the world – to create an unstoppable engine for innovation," said Sanders.

As interim director, Sanders will lead all facets of planning and operations, including planning to build the new downtown Chicago institute, faculty and staff hiring and engagement, development of research and educational programs, and forging agreements with corporate and academic partners. DPI will operate as an executive office of the president within the University of Illinois System. As such, Sanders will work as a member of the leadership team in system offices and work closely with the chancellors, provosts, and deans of all three system universities.

University of Illinois Vice President for Economic Development and Innovation Edward Seidel will continue to help oversee development of DPI and IIN, Killeen said. Seidel has led the planning team that designed the approach for the new research and innovation enterprise, and brought the projects to the point where a full-time team is needed.

"These initiatives are the product of Ed and his team’s vision and passion," Killeen said. "Bringing Bill on board will add to the team’s talent [and] creativity and bring day-to-day attention that is needed now to get DPI up, running, and driving progress for our state."

Seidel added, "I'm looking forward to working with Bill to bring the DPI vision to reality."

He joined the university’s faculty in 1994 and has a long history of academic leadership at Illinois. Along with his term as department head, he served as founding director of the Information Trust Institute (ITI) and director of the Coordinated Science Laboratory (CSL).

At ITI, he built the institute from the ground up, growing it to about 100 faculty members from 28 departments, enabling ITI to create interdisciplinary research teams to address important societal-scale problems related to cybersecurity and trust. While at CSL, he and other faculty members created the Advanced Digital Sciences Center, a bricks-and-mortar research laboratory in Singapore that has received more than $90 million in funding from the Singaporean government to achieve its research vision.

He also led an aggressive faculty hiring program for the department that has yielded 35 new tenure-track faculty, eight teaching faculty, and five research faculty since January 2014. During this time, he more than doubled the number of women faculty members in ECE, from seven to 17, and helped provide millions of dollars of department funds in scholarships to admitted first-year women and underrepresented minority students – resulting in the largest undergraduate enrollment of women ever in ECE.

A Donald Biggar Willet Professor of Engineering, Sanders has won awards for his teaching and research, which focuses on computer system security and dependability. He is a fellow of the American Association for the Advancement of Science, the Institute of Electrical and Electronics Engineers and the Association for Computing Machinery. Sanders holds a PhD in computer science and engineering from the University of Michigan, where he also earned his masters and undergraduate degrees.

Plans for DPI and IIN were announced in October. Work is currently underway on an implementation plan that will establish a timetable for opening and other details of the enterprise, where world-class researchers will work side-by-side with students and businesses to foster next-generation innovation and workforce development.

DPI will be developed on a donated site along the Chicago River, and will bring together top faculty in agriculture, healthcare, computing and other critical fields from the U of I System and partner universities that already include the University of Chicago, Northwestern University, and Tel Aviv University. Nearly 100 new researchers also will be added and together they will connect with hundreds of businesses and thousands of students over time, as well as with entrepreneurs and venture capital firms.

Their research and educational collaborations will address real-world challenges, promoting the kind of breakthrough discoveries that create new products and companies. Those innovations will fuel economic growth, while also providing hands-on experiences for students and nurturing a skilled workforce for the city and state.

The institute will be the centerpiece of IIN, a virtually connected statewide enterprise allowing DPI staff to work with university and business partners in other regions across the state on research and education initiatives that help launch new companies and lift communities.

IIN sites will include the U of I System’s universities in Chicago, Springfield and Urbana-Champaign, and could ultimately grow to other sites in Illinois and beyond.