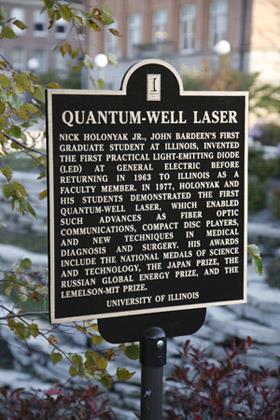 ECE Professor Nick Holonyak Jr. was recognized this fall with a University historical marker honoring him and his development of the quantum-well laser. The plaque is one of only about 40 installed across the expansive Illinois campus to serve as a tribute to noteworthy individuals and their achievements. The Holonyak marker is located just north of Everitt Lab at the site of the old Electrical Engineering Research Laboratory (EERL) on the Bardeen Quadrangle.

Colleagues, friends, and students gathered at a reception on Nov. 9 to celebrate Holonyak and the historical marker. Among the attendees was University of Illinois President B. Joseph White. Speaking to the gathering, he related the story of his first encounter with Holonyak after being appointed president three years ago. He said he did not know of Holonyak when they met during a chance encounter. White asked him to tell him about himself. In explanation, Holonyak simply replied, "Well, I’m pretty famous around here."

"I immediately went to my office, I did my homework, and only then did I realize that perhaps only could Nick say that and have it be a modest statement," said White. "And it actually was. That was my occasion to learn about a man who is a great inventor, whose life story is absolutely astounding - a man who has changed, and is changing, the world. A man who has educated so many people coming behind him."

At age 79, Holonyak has accomplished much in his lifetime. The first graduate student of the late John Bardeen, Holonyak invented the practical light-emitting diode (LED) while at General Electric. He returned to Illinois as a faculty member in 1963, and in 1977 demonstrated the first quantum-well laser with his students. His work enabled fiber optic communications, CD players, and advances in the field of medicine. Holonyak has received numerous accolades for his work, which is ongoing, including the National Medals of Science and Technology, Japan Prize, Russian Global Energy Prize, and Lemelson-MIT Prize. 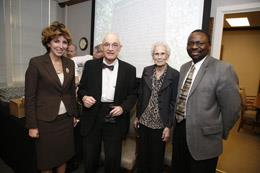 At the reception, ECE Department Head Richard Blahut presented Holonyak with a brick from the old EERL building. "The foundation you’ve laid through your work and through the people you’ve touched, both at the University of Illinois and far beyond, will support new innovations, new discoveries, and the education of new engineers for many years to come," the brick’s inscription read.

Blahut himself shared his personal connection to Holonyak and his work. "When I was a boy...I learned about the great engineers of the world," Blahut announced. "I learned about Alexander Graham Bell and Thomas Edison, Samuel F.B. Morse, Guglielmo Marconi and many others. And I regretted the fact that at my young age, I knew that in my lifetime I would never meet one of these great people. It never occurred to me that I would, in fact, meet someone at the level of these men in my lifetime - Nick Holonyak. I have met a man of the equal of my childhood heroes, and so I can die happily," he said.

Holonyak said it is important to appreciate those who think outside the box and stretch the limits of what they know to be true. "When I came here, I didn’t realize that I had come to a place where you learn to learn," he said. "You’re going to run into the kind of mind that is on the boundary of looking for something more. I think you must always look for those kinds of people. No place is going to be worth much if it doesn’t have the people who know how to go to the boundary and find what there is further. We have to learn to be able to cope with what there is ahead. I hope, more than anything else, that the U of I flourishes because it is a special place. It’s where young people can get started."

Illinois Provost Linda Katehi, also an ECE professor, said Holonyak is known for the quality and uniqueness of his research, as well as its widespread appeal and impact in the commercial sector and products people use on a daily basis.

"The work that...Nick has done, for electrical engineering and for science and for physics, is amazing," said Katehi, who acknowledged she was proud to call Holonyak a colleague. "Nick’s name has been really very well known among all of us who have done work in the area [of electrical engineering], in his immediate area or in other connected areas," she continued. "Something else unique about Nick is the intensity with which he produces new ideas, and his intensity as an individual in terms of the discipline he brings to the thought, and the discipline he brings to the work with his students."

Ilesamni Adesida, ECE professor and College of Engineering dean, marvels at Holonyak’s excellence in his research area. "The number of students, great students, who are now great scientists or entrepreneurs in the field - whether it is LED, transistors, or lasers - just trace it. Everything goes back to Nick," he said. "So that’s the [evidence of the] pervasiveness of his influence in this field. The work that Nick has done has defined the field, and I’m sure it will define it for succeeding generations."