ECE ILLINOIS professors Nitin H Vaidya and Romit Roy Choudhury and ECE affiliate Ranjitha Kumar have been selected as part of this year’s class of Google Faculty Research Awards recipients. Their winning proposals are in the fields of machine learning and data mining, mobile computing, and human-computer interaction, respectively. Nitin H. Vaidya
Vaidya, Associate Head for Graduate Programs at ECE ILLINOIS, seeks to use the federated learning architecture, a subject of previous Google research, to address collaborative machine learning while preserving the privacy of users and clients. The proposed research is motivated by Vaidya's previous work in collaboration with ECE ILLINOIS PhD student Shripad Gade.

Shripad Gade
The proposal, "Privacy-Preserving Federated Learning," cites privacy concerns in the framework of personalized recommendation, such as suggested YouTube videos based on viewing history. The proposal explains that "similar privacy concerns arise in the context of healthcare, for instance, when data belonging to different patients (or hospitals) is used to collaboratively train a neural network for the purpose of improving diagnostic accuracy. The clients may rely on a server owned by a third-party to facilitate the collaboration, making the patient data vulnerable to privacy compromise by the server."

Both Vaidya and Gade are affiiliated with the Coordinated Science Lab. Vaidya is also an affiliate faculty member of the Department of Computer Science at Illinois.

Roy Choudhury, W.J. “Jerry” Sanders III – Advanced Micro Devices, Inc. Scholar in Electrical and Computer Engineering, is an alumnus of computer science at Illinois (PhD ’06) who joined the ECE faculty in 2013. This is his second time winning the Google Faculty Research Award.

In his winning proposal, "Inaudible Voice Commands: The Real World Attack and Defense," he identified key security flaws in devices that utilize microphone hardware. The initial research, a collaboration among Roy Choudhury, ECE ILLINOIS Assistant Professor Haitham Al-Hassanieh, and PhD student Nirupam Roy, is explained in the video above. 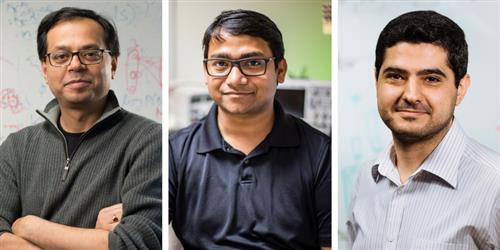 Recent work has shown that specially designed ultrasound signals can be picked up by microphones, creating a "backdoor" into voice recording systems. This reveals dangerous implications as somebody could silently control devices such as Amazon Echo and Google Home from a distance. The team's research aims to demonstrate such attacks and show defenses that can counter both existing and anticipated attacks.

All three researchers are affiliated with the Coordinated Science Lab. Both Roy Choudhury and Al-Hassanieh are affiliate faculty members of the Department of Computer Science at Illinois as well.

Ranjitha Kumar
Kumar received her PhD in Computer Science from Stanford University in 2014, founded Apropose Inc. and served as its Chief Scientist until 2016. Kumar came to Illinois in 2014 as an assistant professor of Computer Science. Google renewed her award in the field of human-computer interaction for the second year.

According to Research at Google, the Google Faculty Research Awards Program "aims to recognize and support world-class, permanent faculty pursuing cutting-edge research in areas of mutual interest." Its goal is to "identify and strengthen long-term collaborative relationships with faculty working on problems that will impact how future generations use technology. Last year, four Illinois faculty members received awards, including three with appointments with ECE ILLINOIS.