“Illinois is proud to lead this effort, which will not only advance military science, but also could lead to breakthroughs that impact many other fields,” said Andreas C Cangellaris, dean of Engineering at Illinois. “The excellence brought forth by this team could transform 21st century technology.”

“This award enables a true collaboration between researchers at ARL and researchers in academia and industry to change the status quo in smart battlefield services,” said Tarek Abdelzaher, the academic lead of the Alliance and a professor of computer science at Illinois. “Through ARL’s Collaborative Research Alliance model, we can change our fundamental understanding of what’s possible when computers, sensors, data, weapons, soldiers, wearables, and media analytics are networked to empower new defense capabilities.” 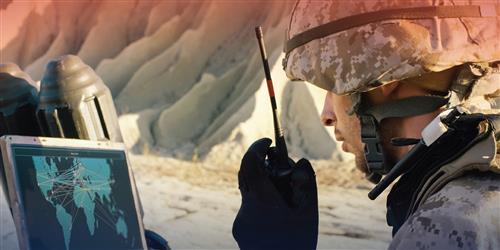 In a battle environment, human operators must adapt to unexpected changes. IoBT researchers aim to create a cyber network of “things” that adapt as the mission evolves. That means that a system will have to analyze its available resources and re-assemble itself to best meet requirements for the present execution.

In addition, these systems must be self-aware and able to reason about their goals, state, vulnerabilities, and other characteristics in order to meet a commander’s intent. They have to be able to counteract and mitigate disruptions and attacks in near real-time and provide stability under uncertain conditions.

The IoBT system must also have cognitive abilities and be able to fuse data from technology with data from humans. It will have to function in a continuous state of learning at multiple time-scales, for example, learning from previous actions while acting in the present and anticipating future moves. As a result, the system will be able to provide commanders with the most relevant information at any given time.

“While commercial IoTs provide some of this capability, it is not challenged in the same manner as on the battlefield,” said Dr. Stephen Russell, ARL’s Battlefield Information Processing Branch Chief and the government lead of the Alliance. “The ‘B’ in the IoBT is a key focus.”

These activities must be reliable and should appropriately leverage all networks – blue, gray, and red – which have varying degrees of trustworthiness. Blue are secure and military-owned networks; gray are often civilian networks with uncertain trustworthiness; and red are adversarial networks.

This effort to understand and exploit the unique capabilities of networked battlefield systems is an interdisciplinary problem that brings together researchers in cyber-physical computing, information theory, security, formal methods, machine learning, networking, control, and cognitive science, among other disciplines.

An integral part of the alliance is the collaboration between ARL and the academic and industry researchers.

On the battlefields of tomorrow, humans and technology will work together in a seamless, cohesive network, giving soldiers a competitive edge and keeping troops and civilians out of harm’s way.

Find the original article on the CSL site.