Andrew Singer may be a vegan, but that hasn’t stopped him from finding valuable uses for beef liver and pork chops in his research. Using those two cuts of meat, Singer and Michael L Oelze, both ECE ILLINOIS professors, have shown for the first time that ultrasound signals can be used to successfully transmit digital data through tissue at data rates capable of streaming Netflix in HD. 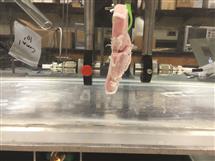 Their research, conducted this past spring, opens the door for all sorts of biomedical possibilities. Singer and Oelze showed that these high rates of data can be sent to and from medical devices implanted in the human body.

If such systems were to switch to safer ultrasound signals, the cameras could transmit data at rates 1,000 times greater. In fact, the experiments showed that ultrasound can transmit up to 30 megabits per second through tissue—enough to send high-definition videos from within the human body. Singer, who has been at Illinois for 18 years, specializes in communication systems and has actively researched underwater acoustic communications for the Navy for over 20 years, focusing on the transmission of signals between ships and submarines. He notes that whales and dolphins have evolved an effective way of communicating for long distances through water—hundreds of miles—using sound. Because the human body can be idealized as a “big bag of salt water,” Singer says that transmitting data short range with ultrasound has great advantages over RF, which heats up water and doesn’t propagate well at all, especially in salt water.

Their new idea came about in 2015 when Singer was talking with Oelze, whose research focuses on biomedical uses for ultrasound. Oelze suggested that it’s not just important to be able to transmit through water; it’s also critical to find ways to transmit more effectively through tissue.

“With its layers of tissue, fat, bone, and organs, the human body provides an even more challenging environment than the ocean,” Singer says.

So Oelze and Singer, along with graduate student Anthony S Podkowa, suspended beef liver and a pork chop in a tank of degassed water (to protect the transducers). Their system has been fittingly named MEAT-COMMS, or Mbps Experimental Acoustic Through-Tissue Communication.

After showing it was possible to quickly transmit hundreds of megabits of data through tissue at short distances, they presented their results at this past summer’s International Workshop on Signal Processing Advances in Wireless Communications in Edinburgh, Scotland. The scientific community took immediate notice, and some labs are already advertising for postdocs to come on board to research biomedical applications for this technology. “We have clearly set off a spark in people’s imagination,” Singer says. Oelze also presented on these results at the Ultrasonics Symposium in Tours, France, this past September. Meanwhile, Singer and Oelze have applied for funding from the National Institutes of Health to grapple with some of the possible obstacles—most notably, miniaturization. For transducers to be implanted in the human body, they will need to be miniaturized and wrapped in a protective casing.

Battery life will also be critical for devices transmitting large amounts of data, but Singer says remote charging of implanted units should not be an insurmountable challenge. Being able to transmit data to an implanted medical device means that software updates to an artificial heart, for example, could be done wirelessly without having to perform surgery to remove the device. This will greatly expand the life of the device.

Another challenge will be dealing with obstacles in the body, such as bone. For instance, if you are trying to send data to a medical device implanted on the heart, you may not have a direct line-of-sight path without hitting bone.

Singer says they will need to determine the effects of scattering, which occurs when the signal hits bone. But again, Singer sees this as an obstacle that can be overcome through clever signal processing. They have successfully dealt with similar signal processing issues when compensating for reverberation effects while transmitting through the ocean.

According to Singer, ultrasound has proven its safety after decades of medical use for other purposes.

“You’d be hard pressed to find an infant in America who didn’t have an ultrasound. It’s been greatly researched,” he points out.

“I imagine that over the next 20 years, we’ll see a tremendous increase in the capabilities of implanted medical devices,” he adds. “What can you do with this form of data transmission? You can do almost anything with it.”