What do the study of the computational principles in living organisms, the end of the world, and a counterculture student-produced guide to the university all have in common? These subjects are all documented in the personal papers of ECE ILLINOIS Professor Heinz von Foerster (1911-2002), whose work and laboratory at the University of Illinois transformed a generation of scientists, engineers, and humanists and the interdisciplinary approaches they employed to answer questions about behavior. 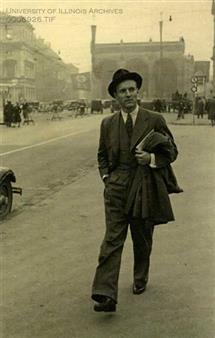 Heinz von Foerster is considered to be one of the pioneers of cybernetics, especially for his role in establishing “second-order cybernetics.” Von Foerster came to the University of Illinois in 1949 initially as director of the Electron Tube Research Laboratory in the Department of Electrical Engineering. Between 1956-1957, he spent a sabbatical studying neurophysiology after receiving a Guggenheim Fellowship. Shortly after, he established the Biological Computer Laboratory in 1958 as a center for the study of the “computational principles in living organisms.” 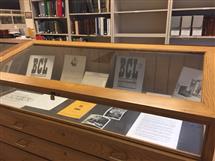 The exhibit can be found in room 146 of the Main Library from from December 2, 2016 through January 31, 2017.
Over nearly two decades the BCL created a unique interdisciplinary research space for cybernetics, drawing as diverse a group of scholars as the Macy Conferences, including anthropologist Margaret Mead and biologist Humberto Maturana. The BCL also organized conferences and was know for its prolific production of publications on cybernetics and cognitive science topics.

The items in this exhibit–including correspondence, photographs, news clippings, examples of the BCL publications, and von Foerster’s research notes–provide a glimpse into the unique context of the BCL and the dynamic intellect of Heinz von Foerster. The exhibit also highlights materials that document his writing of (and reactions to) his notorious article “Doomsday,” which came out of his research on population studies; von Foerster and his colleagues concluded that the world would officially end on November 13, 2026, when the world would become so overpopulated that life would be unsustainable.

Intrigued? Visit room 146 (University Archives) in the Main Library to find out more. The exhibit runs through January 31, 2017.

This story can also be found at: http://archives.library.illinois.edu/blog/heinz-von-foerster-and-the-bcl/.