A team of University of Illinois researchers has discovered the existence of hot atomic hydrogen (H) atoms in an upper layer of Earth’s atmosphere known as the thermosphere. This finding, which the authors report today in Nature Communications, significantly changes current understanding of the H distribution and its interaction with other atmospheric constituents.

Because H atoms are very light, they can easily overcome a planet’s gravitational force and permanently escape into interplanetary space. The ongoing atmospheric escape of H atoms is one reason why Earth’s sister planet, Mars, has lost the majority of its water. In addition, H atoms play a critical role in the physics governing the Earth’s upper atmosphere and also serve as an important shield for societies’ technological assets, such as the numerous satellites in low earth orbit, against the harsh space environment. 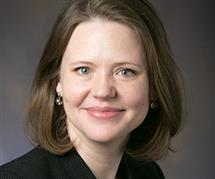 Lara Waldrop
“Hot H atoms had been theorized to exist at very high altitudes, above several thousand kilometers, but our discovery that they exist as low as 250 kilometers was truly surprising,” said ECE ILLINOIS Assistant Professor Lara Waldrop, principle investigator of the project. Waldrop is also affiliated with the Coordinated Science Lab at Illinois. “This result suggests that current atmospheric models are missing some key physics that impacts many different studies, ranging from atmospheric escape to the thermal structure of the upper atmosphere.”

The discovery was enabled by the development of new numerical techniques and their application to years’ worth of remote sensing measurements acquired by NASA’s Thermosphere Ionosphere Mesosphere Energetics and Dynamics (TIMED) satellite. “Classical assumptions about upper atmospheric physics didn’t allow for the presence of hot H atoms at these heights,” recalled Dr. Jianqi Qin, the ECE ILLINOIS research scientist who developed the data analysis technique. “Once we changed our approach to avoid this unphysical assumption, we were able to correctly interpret the data for the first time.” 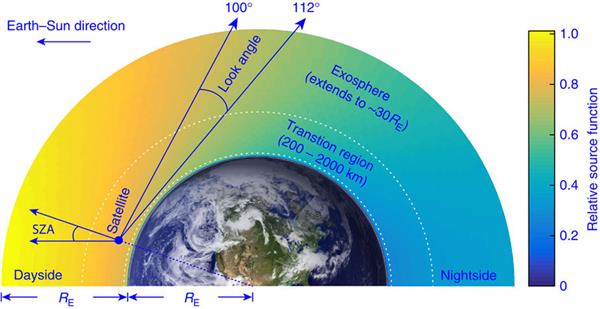 A schematic diagram of the Global Ultraviolet Imager observational geometry. The TIMED satellite is orbiting at 625 km and viewing in the anti-sunward limb direction.

Atomic hydrogen efficiently scatters ultraviolet radiation emitted by the sun, and the amount of scattered light sensitively depends on the amount of H atoms that are present in the atmosphere. As a result, remote observations of the scattered H emission, such as those made by NASA’s TIMED satellite, can be used to probe the abundance and spatial distribution of this key atmospheric constituent. In order to extract information about the upper atmosphere from such measurements, one needs to calculate exactly how the solar photons are scattered, which falls into Qin’s unique expertise. 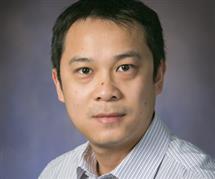 Jianqi Qin
Under support from the National Science Foundation and NASA, the researchers developed a model of the radiative transfer of the scattered emission along with a new analysis technique that incorporated a transition region between the lower and upper extents of the H distribution. “It turns out that the new model fits the measurements perfectly,” said Qin. “Our analysis of the TIMED data led to the counter-intuitive finding that the temperature of the H atoms in the thermosphere increases significantly with declining solar activity, in contrast to the ambient atmospheric temperature, which decreases with declining solar activity.”

Qin added, “We will definitely keep working on this puzzle, because knowledge about the H density distribution is critical to the investigation of our atmospheric system as well as its response to space weather, which affects many space-based technologies that are so important for our modern society.”