Researchers to base next upper atmosphere study in Chile

After conducting several studies of the upper atmosphere with remote sensing in 2007, ECE scientists Gary Swenson, Alan Liu, Chet Gardner, and Steven Franke have decided to conduct their third long-term study at the Cerro Pachon mountaintop in Chile. "This particular location in the Andes is a very dynamic source of waves we study," Swenson said. "Other investigations of satellite data have shown it to be a hot spot."

The study is scheduled to start in June 2008 and last approximately five to 10 years. In preparation for the study, a new building to house the research is currently being built on top of the mountain. The building, called the Andes LIDAR Observatory, or ALO, will allow the researchers to house their own equipment.

During the first year of research, Swenson said he and the other researchers will hold three, three-week "campaigns," as a way to obtain data from different seasons throughout the year. While the first trip will be held this summer, the second and third campaigns will be held sometime during the fall and winter months, respectfully. During these studies, Swenson said that the participants will take turns operating the systems, which will only be operated at night, from sunset to sunrise.

Following the first year of research, Swenson said the group plans to train a Chilean to operate the system, so the research can continue even when University representatives are not present at the site.

"We will be coming back (to the University) to teach," Swenson said. "We are only part-time researchers. We normally spread out our operations through the course of the year. If we have someone there year-round, data will be acquired on a more regular basis." Before deciding to hold the long-term study in Chile, Swenson and other University researchers visited other possible sites in 2007. The top competitor was the Huancayo Geophysical Observatory, which Professors Swenson, Franke and Gardner visited in January of last year. From that study, the researchers determined that the observatory, which is operated by the Geophysical Institute of Peru, had the size and high altitude (10,900 ft) to successfully study the part of the atmosphere that couples into the ionosphere.

However, after visiting Cerro Pachon, along with Cerro Tololo, in May 2007, Swenson and Gardner made the decision to conduct the long-term study in Chile. While at the site, they discovered that although the mountain had a lower altitude than Huancayo, Cerro Pachon (8,900 ft) provided more clear nights per year, which Swenson said will benefit their research immensely.

"We looked at both sites very seriously because they both have infrastructure and are excellent research sites," Swenson said. "We needed to be positioned at a high altitude to minimize atmospheric losses to their instruments and needed a frequency of clear skies...Chile has the advantage of more clear skies."

Swenson also said the site is already very accessible due to its heavy use by astronomers, providing researchers with power, water and roads to easily travel on. 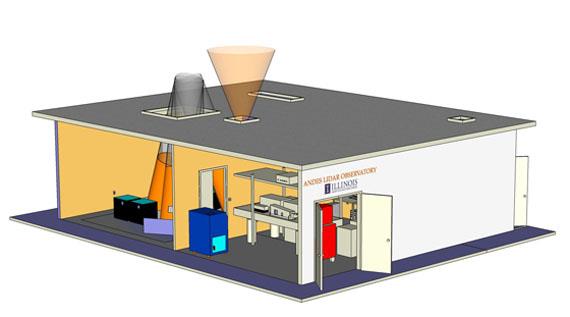 The Andes LIDAR Observatory is being constructed in the mountains of Chile to house a new ECE research project.

In order to successfully study the instabilities of the atmosphere and the effects of small-scale waves, the research group will use Light Detection and Ranging, commonly known as LIDAR. LIDAR is a similar to a radar, but uses a pulsed laser light instead of microwaves. The group will use a newly modified version of the device called the sodium wind/temperature LIDAR, which was developed by Professors Gardner and George C. Papen, along with their students in the late 1980s and early 1990s.

"This is the first time our sensors will be very, very sensitive, and able to make wind temperature measurements with better precision that ever before," Swenson said.

Other research tools that will be used to research the chemistry of the atmosphere include imagers, spectrometers, and meteor radars.

Aside from Swenson, Franke, and Gardner, University students will also participate in the study. Swenson said that they decide how many students, which may include undergraduates and graduates, a few months before each campaign. For the initial campaign, graduate students Chad Carlson and Tony Mangognia will participate.

The study in Chile will be the third long-term study conducted by the researchers. Previous campaigns with this set up of instrumentations took place in Maui from 2001 to 2005 and in Albuquerque, New Mexico, in 1994 and from 1997 to 2000.