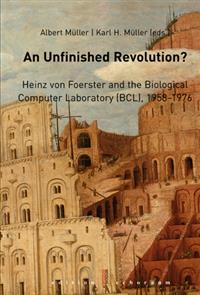 Two Austrian scholars have done their part to distill and preserve a University of Illinois legacy. Albert Müller and Karl Müller (no relation), professors at the University of Vienna, will visit Champaign-Urbana March 28 – April 1 to release the published results of their work: a collection of essays about former electrical and computer engineering professor Heinz von Foerster and his Biological Computer Laboratory (BCL), where pioneering cybernetics research thrived from 1958 until 1976.

The collection—entitled An Unfinished Revolution? Heinz von Foerster and the Biological Computer Laboratory, 1958–1976, and published by the Viennese house Edition Echoraum—brings together memories, appreciations, and critical appraisals by former students and colleagues of von Foerster.

The Illini Union Bookstore, 809 S. Wright Street, Champaign, will host the editors for a reception and book signing in the second-floor Authors' Corner at 4:30 p.m. on March 28. The event is free and open to the public. From March 29 to April 1, the editors will participate in the American Society for Cybernetics 2007 Conference at the Independent Media Center in downtown Urbana.

"During its lifetime, the BCL was certainly the most important institutional base for cybernetics in the Western world," said Illinois sociology professor Andrew Pickering, who specializes in the history and sociology of science. "Much of the work that fascinates scholars now was done at the BCL and owed much to von Foerster's inspiration."

Von Foerster was born and raised in Vienna in 1911, earned a doctorate in physics, and moved to Illinois in 1949 to head the University's Electron Tube Laboratory in the Department of Electrical Engineering. He became a core participant in the Macy Conferences, regular gatherings sponsored by the Josiah Macy Foundation, where the foundations of cybernetics were laid by the likes of mathematicians Norbert Wiener and John von Neumann, engineer Claude Shannon, physiologists Warren McCulloch and Arturo Rosenblueth, anthropologist Margaret Meade, and others. Von Foerster established the BCL in 1958 and directed the lab until its demise at the end of 1975. He then retired to Pescadero, California, and remained active as a thinker, writer, and speaker until his death in 2002. He influenced fields from technical cybernetics, to philosophy and sociology of science, to psychology and family therapy.

BCL benefited from von Foerster's connections and charisma as the lab hosted an extraordinary array of thinkers and researchers for extended visits. Among these were neuroscientist Ross Ashby, biologists Humberto Maturana and Francisco Varela, and logicians Lars Löfgren and Gothard Günther. BCL researchers developed futuristic machines that emulated the eyes, ears, and neurons of living organisms. These devices—though analog, not digital—count as some of the earliest parallel computers ever built.

The lab bridged the gap between north and south of Green Street, attracting students from across campus for lively, interdisciplinary seminars. In 1969, BCL students published The Whole University Catalog, an irreverent guide to UI modeled on the popular Whole Earth Catalog. In 1974, students published the collection Cybernetics of Cybernetics, which has been reprinted and remains one of the best overviews of the field. Illinois composer Herbert Brün, a pioneer of the avant garde, was a popular presence at the seminars and also collaborated closely with von Foerster on research projects.

Pickering noted that most of the recent resurgence of interest in von Foerster and BCL, as well as in cybernetics generally, has taken place in the humanities and social sciences. "Underlying this revival lies a conviction that cybernetics offers a different 'paradigm' from that of the mainstream sciences, and one which might be better suited to getting to grips with key issues in the world today."