Putting on the headset, you find yourself suddenly riding a platform that takes you 20 feet in the air as you try to keep your balance. Or, you're shooting at angry robots that are menaces to society. Or, you're becoming a frog trying to eat bugs before they get past you. You might even pay a visit to the ancient Assyrian palace in Nimrud, Iraq. All of this happens in an immersive 3-D environment - giving the experience a sense of reality not found in standard videos. Last fall, LaValle returned to Illinois following an extended leave during which he served as head scientist at Oculus, developer of the Oculus Rift virtual reality headset. Facebook acquired Oculus in 2014 for $2 billion.

The 100 students in the virtual reality (VR) course learned the latest technology from someone who had helped develop it.

VR is not new. The technology began in the 1960s, and there was a surge in research in it during the 1990s. But interest in VR waned because the cost of the necessary equipment was so high.

Products like the Oculus Rift have changed that. “In this current wave of technology, things have changed with a high level of quality in a low-cost portable headset,” LaValle said. “Virtual reality causes a lot of hype and excitement, and now the barrier to entry matches that. Before, it was unattainable. You had to spend a million dollars on a system, and it still wasn’t very compelling after that.  Many headsets are appearing on the market now, and they are low-cost and very compelling.” 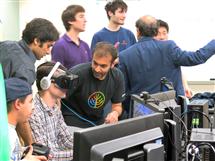 Students in CS 498SL: Virtual Reality demonstrated 33 projects developed over the course of the semester.

LaValle's course focused on issues of human perception and comfort. One important issue is vection, the perception of motion when a person’s body is actually stationary. “If you’ve ever been stuck in traffic before, and a truck starts moving and you might feel like you are moving backwards; that’s an example of vection,” said LaValle. “Your eyes have convinced you that you’re moving backwards and it is sometimes uncomfortable.”

“It is interesting how many small things can cause nauseousness,” said Thomas Reese (MS CS ’15), one of the students in the course. “Professor LaValle taught us throughout the semester just how much the brain ‘auto-corrects’ our world. In order to cope, developers have to augment, reverse, and override many of our brain's perceptions [in order to] make VR a comfortable experience.”

LaValle made sure to build in learning about perceptual psychology and human factors.

We look at the physiology of human vision and a little bit of neuroscience," he said. "These kinds of things need to be fused into the engineering of virtual reality systems. I think that makes the course very unique and provides principles that survive the test of time.”

Nathan Handler (BS CS '15) found that while developing a VR world was relatively simple and straightforward, “creating an application that provides an enjoyable experience while takes full advantage of everything virtual reality has to offer is a much more challenging task.” 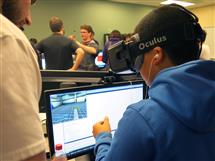 One VR project measured head movements as the participants 'saw' themselves rising on a platform.
Students in the course created 33 projects ( found on the course website), mostly in teams of three or four students. Many were game-related, which fits into the typical use of video consoles. Many went beyond games, though.

The VR Balance project with the risinn platform would be used particularly for older adults, whose balance reflexes could be markedly different from those of younger people. The students measured head movements as participants tried to maintain their balance while they experience the virtual elevation of the platform. More head movements would indicate more balance issues. This project was designed with the help of Kinesiology Professor Manuel Hernandez.

The VR Museum project recreating the Assyrian palace of Nimrud was done with the help of Industrial and Enterprise Systems Engineering Professor Kesh Kesavadas. Students used data from Learning Sites, Inc., and assistance from its CEO, Donald Sanders.

LaValle said researchers across campus are interested in the work happening in the class. LaValle has heard from faculty from business, linguistics, nuclear engineering, psychology, and neuroscience who see potential uses in their fields for this technology. It's popular with students, as well.

“Students from all over campus want to take it," he said.