Loui, Huang, and Polychronopoulos retire from teaching at ECE ILLINOIS

Professors Michael Loui, Thomas Huang, and Constantine Polychronopoulos retired from teaching at ECE in 2014, after long, fruitful careers at the department.

Loui, Huang, and Polychronopoulos have had immensely successful research careers: Loui has done groundbreaking work in theory of computing and professional ethics, Huang pioneered video compression algorithms and has contributed heavily to the field of computer vision, and Polychronopoulos’s systems software prototypes and are ubiquitous in industry, adopted by companies like Intel, Hitachi, and Sun Microsystems.

However, all three noted that their proudest accomplishments have been the students they’ve taught and the knowledge they’ve been able to impart to the next generation of engineers.

Loui started work as a visiting assistant professor in January 1981, at a time of aggressive recruitment within ECE of professors who could teach the newly emerging field of computer engineering. His early research in theory of computing led to a fundamental theorem on the impossibility of agreement among asynchronous processes.

Ever since he started at ECE and especially after his promotion to assistant professor in 1986, Loui has fundamentally reformed the department’s approach to engineering education. He’s created and revised numerous courses in computer engineering. He led the effort to replace the requirement of an advanced digital logic course with CS 225, the core computer science course in data structures, in the computer engineering curriculum. This change enabled computer engineering majors to take advanced software courses.

“Having computer engineers learn about software development seems obvious in hindsight,” Loui said. “But at the time the idea that computer engineering shouldn’t just be about hardware was really radical, and refocusing the curriculum to include that [software] component … is a part of my legacy here I’m really proud of.”

Loui spent one year as a program director at the National Science Foundation and four years as associate dean of the Graduate College at Illinois. In 2014, he was appointed as the inaugural holder of the Dale and Suzi Gallagher Professorship in Engineering Education at Purdue University.

Thomas Huang came to Illinois in 1980 after already having retired from Purdue and MIT. Throughout his whole career, Huang has pursued work in image compression and quality, and more recently in working with deep learning algorithms to identify images without labels.

“When I was a college student in China, I didn’t really know what I wanted to do, apart from I really like mathematics,” Huang said. “Everyone around me said, you can’t live on mathematics alone, so I became an engineer to find a job.” 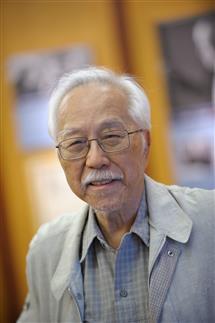 A degree he had chosen out of pragmatism eventually led Huang to pursue a doctorate at MIT, where he joined a research group looking into image compression. Though until this point he hadn’t had too clear of an idea of what his career would look like, he was tantalized by the field and has been working with it ever since.

Huang has led the charge in the field of image compression, contributing to the field’s progress by leaps and bounds. One of his most significant contributions was developing a method of deriving a relationship between movements in three dimensions into movement from two-dimensional images. Looking at a series of images or video in 2-D, Huang’s method allows researchers to extrapolate the object’s movement in 3-D. He also pioneered relevance feedback, or a method of searching for images with minimum human input. Huang’s relevance feedback method sorts images based on a variety of categories and features, such as colors or facial features, and a user searches by inputting an image akin to the one they want to find.

Though Huang retired from teaching in June, he continues to pursue research at the Beckman Institute, with a novel focus on deep learning, or the ability of computers to attribute layers to images. An algorithm could examine an image of a person, for instance, and find a face, arms, and legs. It could then clarify further by attributing facial features, like a nose, eyes, and ears. In this way, he hopes to develop self-sorting image algorithms that can identify and categorize images without any need for human labeling.

Constantine Polychronopoulos joined the faculty in 1986 as a visiting assistant professor after finishing his PhD in Computer Science at Illinois, and became a full professor in 1997.

One of Polychronopoulos’s first accomplishments was joining the Center for Supercomputing Research and Development and helping build the Cedar supercomputer under Professor David Kuck.

“A year before I joined, the center started work on building Cedar,” Polychronopoulos said. “The aim was to keep the Illinois legacy in supercomputing strong, a legacy that started with ILLIAC and goes up till Blue Waters today.”

Polychronopoulos’ research at ECE focused in parallel computing architectures and compilers for supercomputers, and in distributed systems. Distributed systems, or computers across the world processing a single task in unison, was an emerging field when Polychronopoulos started his work in it in the late 1990s, and was the precursor to modern cloud computing.

Polychronopoulos’s research team was also one of the first to develop fluid video streaming technology over wireless cell phone networks, of the sort that is now ubiquitous over 3g and 4g networks. His team turned the technology into a startup called ByteMobile, and provided network optimization to mobile network operators all over the world such as Sprint and Vodafone. He took leave from the university to develop ByteMobile, and also served as a visiting professor at Intel and a distinguished scientist at Kubota Pacific.

ByteMobile was eventually bought by Citrix, the creators of GoToMeeting, and Polychronopoulos works now as chief technology officer and vice president at Citrix, and continues to supervise graduate students’ research.

“I’m very much active and at the top of my game, and I’m not really retired in any sense of the word other than formally,” Polychronopoulos said. “I’m quite busy in the private sector and plan to continue with the research I’m doing with Illinois.”