Kumar wins award at the International Conference on Pattern Recognition

Kumar won the award for his paper titled Generalized Radial Alignment Constraint for Camera Calibration. The paper addresses the problem of camera calibration, a well-researched topic in computer vision where the goal is to estimate the geometric parameters of a camera. 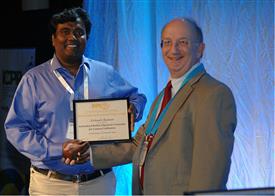 In his paper, Kumar looked at some of the traditional assumptions made in camera calibration for the past couple of decades, and analyzed the case where a few of these assumptions could be relaxed to extend calibration to a wider class of camera types. Kumar studied this relaxed calibration framework and proposed a new analytical methods to solve them.

“Normally, what you assume is that the sensor and lens are parallel, but many times it is not because of manufacturer limitations or intentional tilting of the sensor,” Kumar said. “So what I was working on was figuring out if I could compute how much the sensor was tilted with respect to the lens. We call such a lens-sensor setting as non-frontal sensor.”

ICPR is the one of the largest and oldest conference in the pattern recognition community. It is held biannually in a different city each year. The Piero Zamperoni award along with a $1,000 cash prize is given to the best two authors or single author paper, but the research presented is primarily the work of the student.

Kumar came across the idea for the paper while reading a major camera calibration study from 1987 as a part of his prior work research for the submission of another paper. He discovered that some of the assumptions in the study were too restrictive. So he and ECE Professor Emeritus Narendra Ahuja spent several months doing detailed analysis on a reformulation on the 1987 research in a non-frontal setting, which eventually became the award-winning paper. 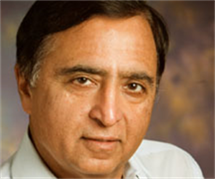 “The award was given for a paper that has elegance,” Ahuja said. “(Kumar’s) research shows that he understood the topic, formulated things correctly, and took an elegant shortcut rather than laborious experimentation.”

Papers with related ideas of non-frontal camera calibration were originally rejected by the pattern recognition community in 2012. Kumar, however, continued to improve his methods and came up with new algorithms, and he was finally able to convince the community of the relevance of his work this year.

Kumar plans to get his PhD by the end of the year, and he will to continue his research in camera calibration and related areas of structure from motion and computational imaging. Using the work he has already done on camera calibration, he is applying it to a specifically designed non-frontal camera developed in Ahuja’s lab, which will capture focal stack images that can be used to generate an all-focus image and depth of the scene points being imaged.

“With increased computational power, the advent of better smart-phone cameras and low-cost DSLRs, I wouldn’t be surprised if such applications turn into popular phone apps in few years or have other industrial applications,” Kumar said. “Hopefully my calibration work will be a minuscule part of that.”