The end of the silicon age is in sight. Xiuling Li has just been awarded a patent for a new way of manufacturing nanowires made of compounds such as gallium arsenide, and believes these compounds will pave the way for the beyond-silicon nanotechnology of the future. “Moore’s Law demands that the amount of transistors that we can pack onto a chip doubles every two years,” Li said. “However, there is a limit to how much smaller silicon-based devices can get. Once the demand arrives for electronics smaller than what silicon-based circuits can provide, new materials like indium arsenide promise to supplant silicon as the building blocks of our new devices.”

However, creating these circuits is anything but simple. They need to be made up of tiny lines of semiconducting material called nanowires, which are grown and arranged in very specialized processes.

The conventional way to create these nanowires is to grow crystals of the semiconducting material upward from the surface, usually by placing a substrate in a furnace and then applying temperature, pressure, and a gaseous form of the material to force it to solidify into a naturally out-of-plane structure, meaning the crystal starts forming at its base, and more of the material collects on top to keep it growing.

This method, though effective, has a few issues. Nanowires are grown vertically, but need to be arranged into horizontal circuits. This means that they need to be realigned into the proper shape, and this process sometimes results in imperfections in the nanowire’s crystal structure that can delay the flow of electrons throughout the circuit. The nanowire also has to be shaped into the correct structure through a process called etching and additional materials have to be added to the nanowires in a system called doping, and both of these done after the crystal’s growth can also damage its structure.

Li’s new method solves these problems in a highly innovative way by growing the crystal exactly the way she wants it. The way that Li improves upon current nanowire crystal growth methods can be thought of as a new way of building a chair. Conventional bottom-up growing is similar to growing a tree, then leveling it, cutting out the parts needed, building a chair out of them, and polishing it. This conventional way of building a chair kills the tree, wastes much of its wood, and is very labor-intensive. Li’s new method is more akin to coaxing the tree into growing itself into a comfortable seat, letting the natural growth process do the work.

In more exact terms, Li’s method uses nanoparticles, or tiny pieces a hundred thousand times smaller than the thickness of a hair, of gold to attract the crystal, then slowly moves the gold nanoparticle sideways so that the crystal ends up growing sideways as opposed to vertically. This improves upon the difficult process of manually adjusting the crystals into shape by allowing the crystal to grow into the shape the developer wants. 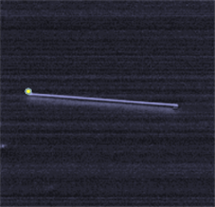 A nanowire in the process of growing in-plane, attracted by the gold nanoparticle on the left.

The nanowire can also start growing in different materials or doped as it grows horizontally, or in-plane, allowing its construction of more sophisticated structures to be much smoother and simpler since the additional materials don’t have to be added post-growth. This minimizes the structural issues that come with realigning the components to fit the circuit and manually coating or doping them. Since the crystal’s structure is unharmed, the electrons in the nanocircuit can flow as freely as possible.

Li, along with her former graduate student Seth Fortuna, developed the idea for this technology about five years ago, which is when she filed the patent. Anyone unfamiliar with the patent filing process would be understandably shocked that it took this long, but Li is unsurprised.

“The patent took some time to come through because of the complex vetting process in this field,” Li said. “However, we finally made the case that our method of growing nanowires horizontally into the shape we need, was indeed a novel idea and in fact, a new crystal growth paradigm in nanotechnology. Since this discovery, her research group, with what she calls exceptional students, has continued to innovate at both the materials and device levels, achieving planar III-V nanowire based devices with record performance.

“Our patented technology completely takes the randomness out of conventional nanowire growth, and paves the way for the post-silicon future,” Li said.