Outside an unassuming room in Everitt Laboratory, which most recently served as the business office, there’s a small plaque, set in a wood frame. “In this room,” the inscription reads, “during the spring semester of 1952, John Bardeen—the two-time Nobel laureate—taught the first course on semiconductors and transistors ... offered at any university.”

Bardeen, the co-inventor of the transistor, was an engineer nonpareil, yet he was just one of many faculty members to make exceptional achievements in Everitt Laboratory. And of course, even though plaques aren’t hung beside each doorway, 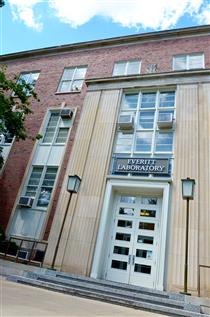 Everitt Laboratory
throughout the department’s tenure in the building, which was dedicated as the Electrical Engineering Building in 1949, success stories have burgeoned, both in the classroom and in the research labs.

“Think of the number of students that have been educated here and the outstanding careers that they’ve had,” said Professor Emeritus Timothy N Trick, whose office, before moving to the new Electrical and Computer Engineering Building this month, was most recently on the third floor of Everitt. “There are probably thousands of stories out there of people’s lives being changed by the courses that they’ve taken in this building.”

In addition to its paramount importance as an instructional space, Everitt has been the home base for two large research groups. There were the power engineers, with initial emphasis on electric machines and motors, and the electromagnetics researchers, including a long tradition of antenna development. In recent years, some members of these groups have been based in other buildings, but the core always remained.

According to Trick, who joined the faculty in 1965, part of this power- and electromagnetics-related focus stems from the history of electrical engineering. When the building opened, much of the postwar research focused on electric motors and radio electronics. The basement was home to an extensive laboratory for large electric motors, which was sited there for stability, with the foundation directly beneath the motors preventing any wobbling.

“That’s pretty much the tradition everywhere at all of the universities that teach machines,” said Professor Peter W Sauer. “The machinery laboratories need big equipment sitting on concrete blocks and that only works on a basement floor. You can’t do that on a third floor.”

As power engineering has evolved over the years—motors, for instance, have become smaller—less space was needed for those research labs and portions of the basement were given to other functions, and when the power engineers move to the new Electrical and Computer Engineering Building, their labs will be on the fourth floor. The research has diversified from the original focus on motors, and now includes everything from electric vehicles and renewable energy to computer simulation of the power grid. In fact, in the new building, one of the power labs offers direct access to rooftop solar arrays—a hands-on, outdoor laboratory. 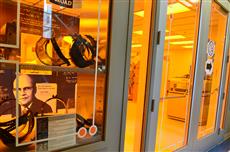 View into the Fab Lab in the basement of Everitt Lab.
Among the most notable basement-level changes in Everitt was the installation of the Integrated Circuit Fabrication Lab (commonly known as the Fab Lab), which was moved from a smaller, less prominent location on the first floor in the late 1990s. There, the Fab Lab has become a campus tour destination, with large windows, evident from within the main entrance, offering prospective students a view of their future—eventually fabricating circuits in an upper-level class.

Although there is a small solar array atop Everitt Lab, it was historically the electromagnetics researchers who were operating at roof level. In 1958, a unidirectional antenna designed by Dwight Isbell—an undergraduate student who was hired to test log-periodic antenna designs—was installed on the roof of the building. This was the first real-world application of this antenna type, and subsequently, log-periodic antennas have been widely used in the communications industry and were included on U.S. moon-landing vehicles.

“If you look at the history of the department, electromagnetics has always been very prominent,” said Professor Jianming Jin, whose office is on the fourth floor of the building. “Many very important antennas were invented ... like the broadband antenna, the log-periodic antenna, and microstrip antenna.”

With these research groups, along with classrooms, instructional labs, and administrative offices, space in Everitt Lab has long seemed limited. Its construction began largely in response to the growing number of students in the department—a postwar boom with young veterans making use of the GI Bill. Yet when it was completed, in 1948, soaring construction prices had forced them to nearly halve the original square footage. Subsequent additions brought the third and fourth floors, and classrooms have been remodeled to accommodate larger groups of students.

When Jin was in graduate school in the 1980s, he remembers looking to ECE ILLINOIS as the “holy place” for electromagnetics research. Yet when he first visited Everitt Lab, before joining the faculty in 1993, he was underwhelmed by the facility. It seemed outdated, and the fourth floor, which 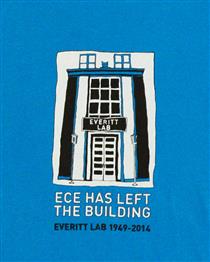 "ECE has left the building" T-shirts celebrate the department's tenure in Everitt Lab. Although the ECE Store website is offline during the building transition, pre-orders of the shirt can be placed by emailing ece@illinois.edu.
has since been remodeled, was poorly lit. One of the senior electromagnetics researchers, Y.T. Lo, however, advised him that the facility forced the researchers to think more creatively—that the team’s breakthroughs were not made in spite of the facility, but rather because of it.

“I think that’s very true,” Jin reflected. “If I look at antennas invented in this lab, they were not the ones that relied on very expensive, advanced facilities. They were all pretty simple, but very ingenuously designed. You can see it’s a product of the brain, rather than a product of the machines.”

While Everitt remained a firm center for the ECE Department, all around, the engineering campus has been in a state of constant growth and metamorphosis. The Electrical Engineering Research Laboratory, for example, predated Everitt and was where some of the early computer and semiconductor work occurred. It was demolished in the early 1990s, around the same time that other interdisciplinary research centers, like the Beckman Institute, were being constructed.

“When I started, the [Bardeen] Quad used to be a parking lot,” said Laurie Fisher, an assistant in the graduate advising office, who has worked in Everitt Lab, on the first floor, since 1986. “Then they built Grainger, which is such a beautiful building.”

An Everitt-Lab replacement has been discussed since the mid-1960s, if not earlier. Although those plans didn’t come to immediate fruition, as the department has grown during the 66 years since Everitt was completed, faculty and students have taken full advantage of new facilities elsewhere on the engineering campus, finding homes in the Coordinated Science Laboratory, the Micro and Nanotechnology Laboratory, and the Beckman Institute, which are all located near the department’s new building on the northern engineering campus.

“Over there, we will be closer to people we want to work with,” said Chew, whose office has been in Everitt Lab since he joined the faculty in 1985. “It will be great.”

At the same time, many faculty, students, and staff will miss Everitt Lab’s proximity to other parts of campus. “Everything is close,” Sauer said. “You can walk over to the Illini Union. You can walk to Campustown and have lunch. You can listen to the bells in Altgeld.”

Before moving to the new building, Sauer’s office has always been in the same spot, near the southwestern corner of Everitt, on the third floor. Tall windows offered vantages of Green Street and the Alma Matter, now restored, welcoming students to campus almost every fall since he joined the faculty in 1977. “I love the building because it’s where I grew up,” Sauer said. “My whole career has been here.”

Trick, who joined the faculty even earlier, in 1965, was appointed to one of the earliest iterations of a building committee, tasked with exploring the feasibility of a new departmental building. “I was one of the new assistant professors, so I was on the building committee back in the late ’60s,” he recalled. “I have been waiting almost 50 years for this to happen.”