Nanotechnology, as a word, tends to enter the vocabulary late. High-school students have “heard the term and have a sense of it being about very tiny things,” said Terry Koker, a chemistry teacher at Mahomet-Seymour High School. “But that’s about the extent of what their prior knowledge is.”

This summer, Koker and three other area high-school science teachers are participating in a new training program at Illinois that aims to give K-12 teachers and community-college faculty 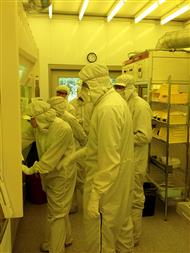 RET teachers learn how to spin coat PEDOT:PSS and fabricate solar cells in the MNTL cleanroom, under the direction of graduate student Lisa Plucinski.
the opportunity to conduct six weeks of research in faculty labs and, in turn, inspire generations of students to consider careers in nanotechnology.

The program, known as the nano@illinois Research Experience for Teachers (RET), is based at the Micro and Nanotechnology Laboratory and managed by the Center for Nanoscale Science and Technology. Funding is provided by the National Science Foundation.

“I would call this a teach-the-teachers program,” said ECE Associate Professor Xiuling Li, the program’s principal investigator. “If we teach a student, the student might be able to reach out to his or her friends, maybe a few. But if we teach the teachers, the teachers can have a much bigger impact collectively, to the whole classroom, even between teachers.”

With four RET participants this year, the program is in a pilot stage, but over the next three summers, the organizers expect to increase attendance to a total of 40 teachers. Regardless of the specific research project, every attendee participates in training sessions, covering the equipment used in cleanrooms, where semiconductors, biosensors, and other devices are fabricated, as well as the bionanotechnology laboratories, where cell and tissue culture and biological research occurs. The program also includes lectures on topics ranging from STEM pedagogy to the societal implications of nanotechnology.

“The teachers are excited that they can then go back to the classrooms and better communicate what it is to do research, what it is to be involved in scientific processes,” said Carrie Kouadio, the program coordinator. “Some of the interesting concepts and skills they learn, they can share with their students.”

While conducting their research, the teachers will develop learning modules based on the lab work, which can then be incorporated into their classroom curricula. In most cases, these will be hands-on exercises, either implementing the research—simplified for high-school lab equipment—or observing nano- or microscopic phenomena.

David Bergandine, a chemistry teacher at University High School in Urbana, is conducting research in Li’s lab with graduate student Paul Froeter, who has been developing self-rolling silicon nitride tubes that have promising biomedical applications.

While the fabrication process requires cleanroom equipment, rendering it impossible at the high-school level, Bergandine is considering exercises where the students could design macroscopic structures that still demonstrate the self-rolling process. Or, an alternative experiment could involve pre-fabricated silicon nitride materials. Students could initiate the rolling phenomena using an etching chemical and make observations with an optical microscope.

“If we could figure out a way to make those films, or at least an analogous rolling behavior, in another setting, then you could actually test your hypothesis. How does it roll? How does it change when it rolls? Things like that,” Bergandine said.

Aubrey Wachtel, a life-sciences teacher at Villa Grove High School, is working with Bioengineering Assistant Professor Andrew Smith and graduate student Mohammad Zahid on a project that involves cell culture and implanting nanoparticles known as quantum dots into the living cells. These nanoparticles can then 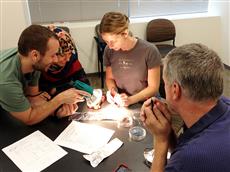 “There are aspects of [the research] that are very easy for me to integrate into areas of my curriculum,” Wachtel said. “For instance, membrane permeability and what cells will allow in and out ... One of the things that is really cool is that even though I may not have the resources in the classroom to really replicate all of this stuff, just taking back the fact that I did it, and being able to use anecdotes, is huge for the kids.”

Villa Grove, where Wachtel teaches, is a rural community, about 20 miles south of the Illinois campus. “Maybe this is true in all schools, but I’ve only taught at this little bitty school, and I know that there’s a very limited amount of exposure for kids,” she said. “So I’ve kind of always taken it on myself: I’ve got to get that exposure and bring it back.”

In addition to the RET program this summer, Wachtel and the other three teachers have participated in a training program run through Nano-CEMMS at Illinois in past summers. That was a two-week program that gave teachers an opportunity to experience some aspects of nanotechnology.

“It’s pretty common for our kids to be interested in research,” Bergandine said, indicating that at least 20 Uni High students have participated in on-campus research, typically during their junior and senior years. “That’s actually part of the reason why I wanted to become involved in this program, because I have guided them in the past. I have encouraged them in the past. I know people on campus, so I can help them get connected. I visit their labs. I know the professors. I know the work they’re doing. But the one thing I haven’t done myself personally is spend the time in the lab like [the students] might.”

Overall, this RET program fits into broader STEM-related goals and initiatives at ECE ILLINOIS, the Micro and Nanotechnology Laboratory, and the Center for Nanoscale Science and Technology. This year, a related Research Experience for Undergraduates (REU) in nanotechnology was also launched, with a dozen students participating in labs this summer, during a 10-week training experience. That program has three of years of funding from the National Science Foundation.

Other efforts aim to bring nanotechnology out of the classroom altogether and engage an even younger audience. The Center for Nanoscale Science and Technology (CNST), for example, has been involved with the Science at the Market booth at the Urbana Farmer’s Market during the summer and fall months.

“I’ve personally been at the booth,” said Irfan Ahmad, executive director of CNST and the program manager for the nano@illinois RET and REU programs. “Parents actually wrote us back and said, 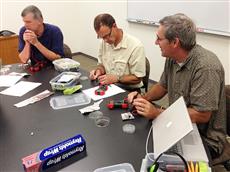 RET teachers Dan Reid, David Bergandine and Terry Koker (left to right) test their solar cells.
‘My kid could not get away from it, and I took him off, but he kept running back. He was so excited.’ So we show them a lot of hands-on things.”

During the RET program, in fact, the teachers will participate in one of those Saturday teaching experiences.

“This goes well with the land-grant mission of the university,” Ahmad added. “We are totally invested in our communities and the growth and development of our communities by engaging them early on.”

Some nanotechnologies are more difficult than others to demonstrate in the classroom, however, as Daniel Reid, a chemistry and physics teacher at Champaign Central High School, is discovering. He is conducting research with ECE Assistant Professor Daniel M Wasserman and graduate student Runyu Liu, fabricating a silicon surface with embedded phosphorus lines that cause infrared light diffraction.

“The interesting thing about it is instead of having something on the surface that causes the diffraction, the phosphorus diffuses into the silicon. So it’s a flat surface, but you still get the interference pattern,” Reid said.

In a high-school laboratory, however, this is difficult to demonstrate. For one, visualizing the infrared spectrum takes special equipment, so the students wouldn’t be able to see the diffraction, and for another, the nanofabricated features that cause the diffraction can’t be seen; they’re imbedded in the surface of the silicon.

“But it’s important to understand [infrared light] because one of the major focuses of the next generation standards in physical science is wavelength and communication,” Bergandine pointed out. “Well, the wavelength used for most communication in fiber is actually infrared. So if you don’t understand what infrared is and don’t understand how it interacts with materials, you’re going to have a hard to time moving ahead in the future.”

Koker, meanwhile, is working on a project in ECE Associate Professor Lynford L Goddard’s lab, with graduate student Kaiyuan Wang, and although their project also involves nanofabrication, the classroom adaptability seems promising. They’re using a video projector, coupled with a series of lenses, to create patterned surfaces on a semiconductor wafer—a process developed by Goddard, ECE Associate Professor Gabriel Popescu, and their students. To optimize this for the classroom, Koker is exploring a setup that involves cheaper semiconductor materials, high-school friendly chemicals, and existing chemistry-lab equipment.

“They’re looking at how to simplify the setup and remove some of the optics, sacrifice a little bit of the resolution, but still get the point across,” said Goddard, who is the co-principal investigator for the RET program. “We’ve found ways to, for example, hold lenses with chemistry ring stands and get beam splitters that are parts of kids’ toys. ... If you have the projector already in your classroom, the components that you would need to build this setup are maybe $20 or $30, versus the research-grade one was like $2,000 in parts.”

The RET participants are selected through a competitive application process, and part of the funding from the National Science Foundation goes toward a stipend for the teachers’ time, in addition to some assistance with the acquisition of classroom materials for the teaching module.

In future years, the program organizers hope to attract teachers from across the country and will provide housing accommodations when needed.

“I really appreciate the time and effort teachers do outside of school,” said Mariam Saadah, an incoming freshman in bioengineering, who is helping with the RET and REU programs. “It’s interesting how they ... immerse themselves into the [research] community and get more knowledge about what’s going on in the world. That’s something I aspire to in the future, that wherever I am, it doesn’t mean that I have to stop there. There’s always something more to do.”