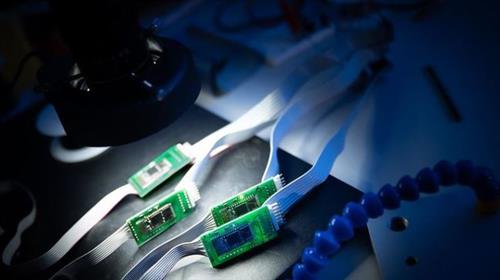 Credit: David Baillot/Jacobs School of Engineering/UC San Diego (KUTV)
Illinois ECE Associate Professor Kirill Levchenko joined a team of engineers from both the University of California, San Diego Jacobs School of Engineering and the University of Illinois to develop an app that allows for state and federal inspectors to detect card skimmers installed in gas pumps or ATMs.

Card skimmers are small devices that can fit on top of real card readers at self-service terminals such as gas pumps or ATMs. They easily blend in with the machine, making it hard to distinguish. Kirill Levchenko
According to KUTV, this new app called Bluetana "detects the Bluetooth signature of the skimmers" which allows for inspectors to locate the devices without having to open up the gas pumps. Bluetana was "developed with technical input from the United States Secret Service" and is not available to the general public.

In its one year of operation, Bluetana has helped locate 42 Bluetooth-based skimmers across three states. These skimming devices can cost less than $20 to manufacture and steal more than $4000 a day according to UC San Diego. Furthermore, these skimmers not only steal the customers' card numbers, but are also capable of stealing their billing ZIP code and PIN.

Levchenko is also affiliated with the CSL.