MNTL dedication: Opening the door on a fantastic voyage

A ribbon-cutting ceremony was a featured part of the Micro and Nanotechnology Laboratory building dedication on September 4.

"We tend to forget nanotechnology is barely a gleam in broader society," explained Arden Bement Jr., director of the National Science Foundation. Bement was a featured speaker at the Nanotechnology Workshop hosted by Center for Nanoscale Science and Technology (CNST) on September 4, where he encouraged the faculty and researchers in attendance to help enlighten the public at large about their work, to make the field a "fantastic voyage," a "voyage we will all be able to travel together."

Bement's comments preceded the dedication of the recently expanded Micro and Nanotechnology Laboratory (MNTL). The $18 million, state-funded expansion project added new lab, research, classroom, and meeting space, creating one of the nation's premier and largest research laboratories in academia for micro and nanoelectronics, nanophotonics and optoelectronics, nanomedicine and bionanotechnology, and MEMS/NEMS and integrated systems research.

Larry Eppley, chairman of the U of I Board of Trustees recalled the rich tradition of innovation, excellence, and leadership that has characterized science and engineering at Illinois. Some of those innovations include semiconductors, light-emitting diodes, laser transistors, plasma displays, supercomputers, the betatron, skyscrapers, and even air conditioning.

In his comments, President B. Joseph White recounted an e-mail he recently received from Patrick Walsh, a 2007 Illinois graduate whose solar-powered LED lantern is being developed to fill the need for inexpensive and non-polluting lighting for 1.5 billion people around the world. Today, White said, he is looking forward to hearing about how the lab will help build "the next generation of human and intellectual capital at the University of Illinois."

Illinois Capital Development Board Chairman Anthony Licata noted that the MNTL is just the latest of several state-supported projects intended to keep the University of Illinois and the State of Illinois at the forefront of science and engineering research and development. These include the National Center for Supercomputing Applications (NCSA) building, the Institute for Genomic Biology, Tech-Transfer Incubator facility, plus several major projects currently in the pipeline. 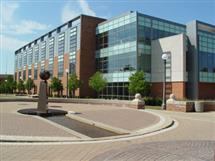 Chancellor Richard Herman reflected on potential applications for some of the work currently being done at the MNTL. He described how a diabetic patient with a microscopic glucose sensor implanted in her thumb could be monitored by her physician, and, if necessary given the insulin or other medication remotely.

"It sounds like science fiction," Herman said. "But that's what the future of nanotechnology holds." Herman mentioned that the MNTL is part of a three-pronged effort to address nanotechnologies, which are also being investigated at the Coordinated Science Laboratory and the Frederick Seitz Materials Research Laboratory, among other places across campus.

According to Mike Bragg, executive associate dean for administrative affairs in the College of Engineering, the expansion will help realize "our vision for the Micro and Nanotechnology Laboratory as a facility not only for cutting-edge, multidisciplinary research, but also as a training laboratory for preparing the next-generation workforce in areas where Illinois has leadership: micro and nanoelectronics, nanophotonics and optoelectronics, nanomedicine and bionanotechnology, MEMS/NEMS and integrated systems.

"Coupled with our strong tradition of profound and paradigm-shifting novel discoveries, it becomes clear how pivotal this laboratory is to the college and the campus, to economic development in the state, and in a larger sense, to the wellbeing of society," Bragg said.

ECE Professor and MNTL Director Rashid Bashir also recognized the federal government and semiconductor industry partners who have provided much of the equipment within the laboratories.

"Clearly, Illinois has been a world leader in micro and nanotechnology up to this time," remarked Ilesanmi Adesida, dean of the College of Engineering, whose own research is among the pioneering efforts in semiconductor fabrication at the nanoscale. Adesida is also the director of Center for Nanoscale Science & Technology (CNST), and the previous director of the MNTL.

"I am confident that we have among our faculty the researchers who will lead the way in the 21st century," Adesida added, "And that this extraordinary facility will be a critical factor in their success."