Holonyak celebrated at Parade of Lights 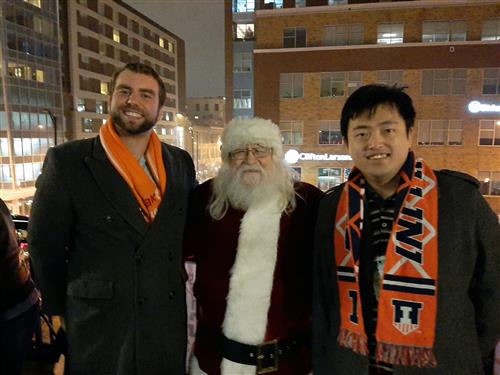 Holonyak Graduate Fellows John Carlson and Junyi Qiu
Every year on the Saturday after Thanksgiving, downtown Champaign glows as the Parade of Lights comes to its end. It was only fitting that a parade illuminated by LEDs would have the inventor of the red LED as its grand marshal. Nick Holonyak, Jr
According to an article from The News-Gazette, ECE ILLINOIS alumnus and former professor Nick Holonyak, Jr, John Bardeen Endowed Chair Emeritus in Electrical and Computer Engineering and Physics, was honored as the parade's grand marshal for this year.  Although Holonyak wasn’t able to attend the parade, he was represented by Holonyak Graduate Fellows John Carlson and Junyi Qiu.

“He was actually suggested to me during the parade last year by one of our Champaign business partners,” said Champaign Center Partnership Executive Director Genevieve Kirk to The News-Gazette.

“I didn’t actually know a whole lot about him until I was a judge for the 70-under-70 awards earlier this year, and when I read his nomination and learned more about his history — father of the red LED and his connection to University of Illinois and that he lives in the community at Clark-Lindsey, it seemed very fitting for an event illuminated by LEDs to honor him in this way.” 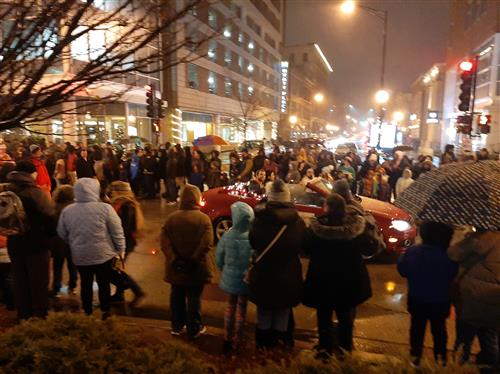 The Champaign Center Partnership and the Champaign County Economic Development Corporation held an event earlier in November to declare November 30 as Nick Holonyak Jr. Day and presented him a trophy with an LED-lit Christmas tree on top.

The same trophy would be presented to the top three float entries at the parade with local youth actors judging the entries. Prior to the main event, there was also a scavenger hunt, an all-day holiday market SoDo Theater, visits with Santa at Big Grove Tavern and caroling. The Marching Illini also made an appearance at the parade following the Illinois football game against Northwestern.

"I feel like you never see Champaign so animated as during this event," said Kirk, "especially with a family audience."

Read more from The News-Gazette here.