Mohan funded by Toyota for work on V2X communications security

Vehicle-to-everything (V2X) communications will be critical in improving driving safety and traffic efficiency, especially as more cars are connected to other cars and the world around them. Auto giant Toyota is collaborating with ECE ILLINOIS Assistant Professor Sibin Mohan and Information Trust Institute (ITI) researchers to create technology that enhances secure communications between cars and their surroundings. 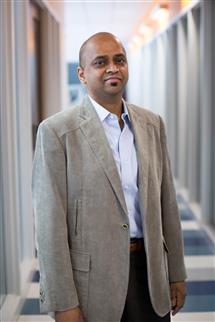 Sibin Mohan
Sibin, a research assistant professor in ITI and the Dept. of Computer Science, and graduate student Monowar Hasan, are in their second year of working with Takayuki Shimizu and Hongsheng Lu, researchers at Toyota R&D InfoTech Labs, on security for V2X technology.

“Working with Toyota means there’s potential for real world impact,” Mohan said. “There’s an academic perspective, but if we come up with some good solutions, analyses or tools, they could be deployed in real vehicles and that have a significant impact.”

In the first year of the project, the team researched wireless vehicle-to-vehicle communications, especially in relation to other vehicles during traffic congestion. By analyzing a group of vehicles, the team was able to evaluate the communication performance and the cars’ behavior from a V2X network perspective rather than as individual components. In the real world, cars would not only communicate with other vehicles, but also with smart traffic lights, road sensors, and eventually even smart city infrastructure.

For example, V2X technology could allow multiple cars coming to an intersection to be able to communicate with each other to avoid potential traffic accidents, as well as communicate with the traffic light to adjust speeds based on whether the traffic signal will be red, yellow, or green by the time they arrive. It could also allow vehicles to receive a report about an incident (say, lane closures or roadside construction) so that they can change lanes or slow down in advance. 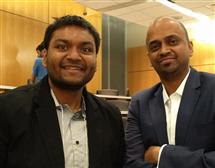 Monowar Hasan (left) and Mohan
Using this type of technology would be revolutionary, but there are potential security threats by malicious users as in other communication technologies, which is the main focus of this project. The messages sent among the vehicles are currently protected by standardized security mechanisms. So, it is not easy for malicious users to compromise its security. However, there is still a possibility for encountering malicious messages, by a rogue entity with valid security credentials, for example. The team is working on developing methodologies that would help vet the messages a vehicle receives from other sources.

“We are currently working on a framework for vehicles to ensure the trust of the information the vehicle gets from its neighbors,” said Hasan, a fifth-year computer science student. “How can we combine all the information that the vehicles receive via V2X communications and ensure those are genuine so that it doesn’t cause any adverse effect on the roads?”

The partnership between Toyota and the researchers began in Spring 2018 when Hasan accepted an internship with Toyota to research wireless vehicle-to-vehicle communications. After seeing the kind of research that Hasan and his adviser Sibin Mohan were conducting, Toyota not only offered Hasan the opportunity to return to Toyota for another internship this year, but also funded Mohan’s research group with $60,000 to continue the research.

“I found they (Toyota) had a project similar to what Professor Mohan and I are doing,” said Hasan. “I contacted them and described the kind of research we do here and told them since we are exploring similar domains and have expertise, so let’s collaborate together.”

The research will continue throughout the next school year. Mohan believes this type of research will allow for better understanding and, ultimately, technology that spans companies and countries.

Check out the original article on the Information Trust Institute site.