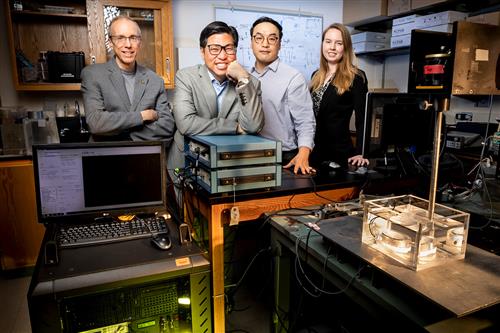 Jeffrey Moore, left, King Li, postdoctoral researcher Gun Kim and graduate student Abigail Halmes have collaborated to develop an ultrasound-activated synthetic molecule that can emit light deep inside biologic tissue for a variety of medical uses and therapies. Photo by Fred Zwicky
CHAMPAIGN, Ill. — A research team including ECE ILLINOIS Professor Michael L Oelze has opened a new line of communication between biomedical researchers and the tissues they study. The new findings, reported in the Proceedings of the National Academy of Science, show that high-intensity focused ultrasound waves can penetrate biological tissue to activate molecules able to perform specific tasks.

The research, conducted in vitro and in mice, addresses the challenges of noninvasive access to deep tissue for therapeutic purposes without causing permanent damage. The study successfully demonstrates the ability to trigger chemical reactions on demand, in a very targeted manner while using a technology already approved for medical use.

Gun Kim and Abigail Halmes work on equipment that emits an ultrasound wave inducing a reaction that produces light in synthetic molecules.
“In the broadest sense, we are trying to develop remote-controlled systems that can eventually be used in biomedical applications,” said King Li, the dean of the Carle Illinois College of Medicine, a researcher at the Beckman Institute for Advanced Science and Technology at Illinois and a study co-author.

“I learned that King was interested in finding a way to remotely activate genes using light – a field called optogenetics,” said Jeffrey Moore, the director of the Beckman Institute, a chemistry professor and a study co-author. “This presented a great opportunity to tell him about my research in synthetic polymer chemistry and mechanics.”

Moore studies synthetic molecules called mechanophores that respond to force by changing color or generating light – something he believed could harness the mechanical force of an ultrasound wave and trigger a chemical reaction that emits light. The concept is exactly what Li was seeking.

“Light has a limited penetration range in opaque materials, including living tissues,” Li said.  “The ability to use ultrasound to penetrate opaque materials and then trigger mechanophores to produce light deep within these materials will open up many possibilities for applications such as gene activation.”

Although the researchers have successfully demonstrated remote generation of light in biologic tissue without causing damage, the intensity of that light is still not enough for optogenetic applications.

“We are getting close,” Moore said. “When we completed the study, we were within about a factor of 10 of the light intensity needed to switch on genes, but now we are closer to a factor of two.”

The interdisciplinary team of study co-authors, which includes Oelze and Beckman Institute researchers Gun Kim, Vivian Lau and Abigail Halmes, continues to refine the technique and seek other biomedical applications.

“This combination of high-intensity focused ultrasound and mechanophores can be utilized for many applications, and light production is only the beginning,” Li said. “We are already actively exploring other applications.”

Light cannot travel through opaque material, but ultrasound waves – which have a well-documented safety record – can, the researchers said.

Oelze is also affiliated with the CSL and Beckman Institute.

Check out the original article on the Illinois News Bureau site.