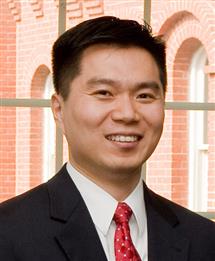 Keundo Park (BSEE '95)
ECE ILLINOIS alumnus Keundo Park (BSEE ’95) knows firsthand the stress, fear, and struggles that come along with paying for a college education- especially when you come from a family with limited financial resources. “I wouldn’t say we were ‘dirt poor,’ but we were pretty poor,” explained Park.

Park fought and overcame financial obstacles to attend the University of Illinois at Urbana-Champaign by competing for, and earning, an ARMY ROTC scholarship. “That really helped get me through school without debt,” said Park.

However, it wasn’t the same for many of his peers. “It put something in me that said there has got to be a better way.” Park dreamt of a way to help students get through college without taking on so much debt. Today, his dream is becoming a reality.

“My hope is that I can help in a small way to give those young students, who have the aptitude but just don’t have the financial means to get there… an option to say ‘Here is a potential scholarship that will help me choose ILLINOIS.”

Park thrived at ECE ILLINOIS and went on to serve as an Army Signal Corps Officer. He held various leadership positions from Platoon Leader to Brigade Signal Officer in the United States and Republic of Korea. He spent nine years in the private sector as a strategy and technology consultant. Park later returned to the United States Army as an operations research analyst. He currently works as a management and program analyst for the Federal Air Marshal Service.

Giving back to ECE ILLINOIS was something Park thought he would do years down the road, but The Grainger Matching Challenge offered him an opportunity to double his money and double the impact.

“My goal was to do this later on when I had a lot more wealth to give but how can you not take advantage of The Grainger Matching Challenge? You double your money!”

The Grainger Matching Challenge will match donations up to $25 million to Engineering at Illinois’ undergraduate scholarship endowments from January 1, 2017 — December 31, 2019. Learn more at GIVING TO ECE ILLINOIS .