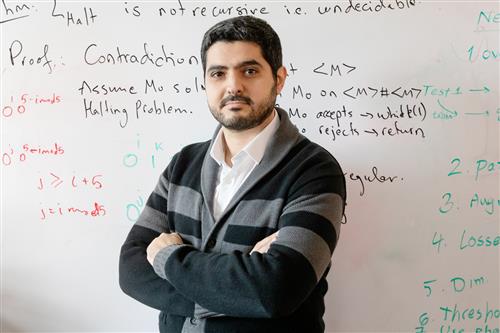 Haitham Al-Hassanieh (Photo by L. Brian Stauffer)
ECE ILLINOIS Assistant Professor Haitham Al-Hassanieh has been named as one of this 126 recipients of the 2019 Sloan Research Fellowships from the Alfred P. Sloan Foundation. According to the foundation, the awards “honor early career scholars whose achievements mark them as among the most promising researchers in their fields.”

Al-Hassanieh works on designing systems and algorithms for wireless networking and mobile sensing in order to enhance and scale connectivity in future networks and the “internet of things.” He received a Ph.D. from the Massachusetts Institute of Technology and joined the U. of I. faculty in 2016. He is an affiliate of the department of computer science and of the Coordinated Science Laboratory. He also leads the Systems and Networking Research Group. The fellowship will support his work in computer science.

“Sloan Research Fellows are the best young scientists working today,” said Alfred P. Sloan Foundation president Adam F. Falk. “Sloan Fellows stand out for their creativity, for their hard work, for the importance of the issues they tackle, and the energy and innovation with which they tackle them.”