Dragic highlights enabling role of fiber laser technologies; paper among "Most Read" from 2018 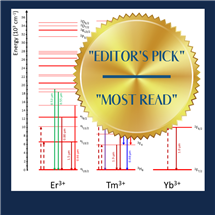 ECE ILLINOIS Assistant Professor Peter D Dragic‘s research highlighting the importance of materials engineering for high power fiber laser applications is listed as one of the most read journal articles in Applied Physics Reviews from 2018.

The published paper, "Materials for optical fiber lasers: A review," was also awarded “Editor's Pick” at the time of publication.

Dragic’s paper highlight’s the enabling role of fiber laser technologies. While high-power continuous wave (CW) fiber lasers have entered the mainstream, aside from mode-locked lasers, pulsed versions suffer from power limitations that come in the form of nonlinear light-matter interactions.

According to Dragic, there are a number of these adverse effects and can be managed, to some extent, with waveguide design and engineering. However, many key applications that could take advantage of the optical fiber platform require more than just management of nonlinearities. In many cases, the wholesale removal of these effects is necessitated. "In other words, we don't want to make things a few times better...what we need is to make them hundreds of times better. We believe that the interdisciplinary design of fiber, incorporating both materials and waveguide engineering methodologies, is the correct path to ultra-high-performance fiber lasers for applications including spectroscopic and coherent lidar systems," says Dragic.

"We have already shown that there is a direct path to the complete removal of several deleterious nonlinear parasitic phenomena, which teases with the potential for unlimited power scaling in a number of laser applications," adds Dragic.  Similar approaches can be taken to vastly improve the performance of distributed fiber sensing systems, where the fiber itself forms the sensing medium.

This is important from a system perspective since many of these applications require the scaling of laser power squared for a linear scaling in system performance.  In other words, increasing the system signal-to-noise ratio by a factor of 10 requires power scaling of 10^2 or 100 X, demanding disruptive leaps in technological advancement. Applications for fiber lasers include industrial manufacturing, weapons systems, down-hole drilling, medicine, and lidar.

The paper, "Materials for optical fiber lasers: A review” can be found online here

Dragic is also affiliated with the MNTL.