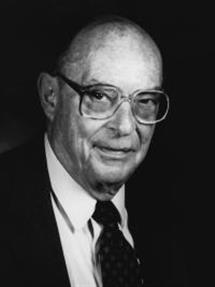 John Bardeen (Photo cred: Engineering at Illinois)
On December 3, the state celebrated its 200th birthday and as part of the bicentennial celebration, the Illinois Bicentennial Commission conducted public polls in conjunction with the Abraham Lincoln Presidential Library and Museum and The State Journal-Register to determine the most influential people, places, and moments from the state's rich history.

Through the Top 200 of Illinois website, people were able to vote online for the best movies, most inspiring leaders, greatest books, top businesses, and much more. On December 3, the voters would have now chosen their 10 favorites in 20 different categories - the Illinois Top 200 list. Nick Holonyak, Jr
Amongst the list for the top ten scientists in Illinois' history, two faculty members from ECE ILLINOIS, John Bardeen and Nick Holonyak, Jr, John Bardeen Endowed Chair Emeritus in Electrical and Computer Engineering and Physics, were recognized for their research and contributions. According to the website, Bardeen was honored for being the only person to win the Nobel Prize in Physics twice: first for inventing the transistor and then for his research into superconductivity. Bardeen served as a professor at the University of Illinois for almost 40 years. Holonyak was recognized for inventing the first diode that produced light in the visible spectrum, ultimately paving the way for LED lights. He is also in the National Inventors Hall of Fame.

Check out the Abraham Lincoln Presidential Library and Museum website to view all the lists.