Last January, ECE ILLINOIS Assistant Professor Andrew Miller boarded a plane with a Geiger counter, an air gapped laptop, and some radioactive material from Chernobyl. Miller and his colleague Ryan Pierce flew up 3,000 feet and used the Geiger counter to measure the radioactive decay from the Chernobyl waste. After they landed, Miller and Pierce used the data that they had compiled to help secure Zcash, a privacy-oriented cryptocurrency.

Both Miller and Pierce were participating in the Powers of Tau, an ongoing cryptogaphic "ceremony" in which each participant samples a source of randomness and generates part of a cryptogaphic key with that data. In turn, the key is used to keep Zcash transactions private according to Motherboard.

Dedicated attackers are capable of stealing data from an air gapped computer inside a Faraday cage, so to avoid any potential attacks, Miller and Pierce conducted their research in a small airplane 3,000 feet up in the sky. 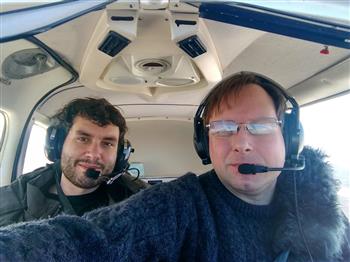 Zcash is an experimental Bitcoin alternative that launched in 2016 and differs from other popular blockchain-based currency due to its emphasis on anonymity and use of new and experimental cryptography. By using zero-knowledge proofs or zk-SNARKs, potentially identifying information can be hidden while validating transactions.

In order for zk-SNARKs to work, shared mathematicals parameters for the network must be set by generating random numbers or what is also called "toxic waste." These numbers must be random bcause if they are discovered, they could be used to reverse engineer the math initially created the public parameters, essentially creating Zcash out of thin air.

By generating these random numbers from the time differences between consecutive electrical pulses from electrons that were knocked loose by the radiation from Chernobyl, Miller and Pierce took the term "toxic waste" literally.

Pierce said, "I used a radioactive source from Chernobyl because I believe in drawing attention to the catastrophe that occurred there. It is the world's worst industrial environmental disaster, but it has become a place of wildness and beauty. It is a reminder that we need to find a solution for disposal of actual radioactive toxic waste."

Miller is also affiliated with the Coordinated Science Lab (CSL) and CS @ ILLINOIS. Read more about Miller and Pierce's work at Motherboard.