A new portable device can quickly find markers of deadly, unpredictable sepsis infection from a single drop of blood.

A team of researchers from the University of Illinois at Urbana-Champaign and Carle Foundation Hospital in Urbana, Illinois, completed a clinical study of the device, which is the first to provide rapid, point-of-care measurement of the immune system’s response, without any need to process the blood. 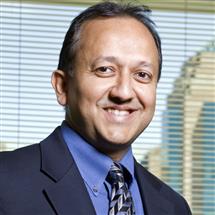 Rashid Bashir
This can help doctors identify sepsis at its onset, monitor infected patients and could even point to a prognosis, said research team leader Rashid Bashir, an ECE ILLINOIS and Beckman affiliate and *executive associate dean of the Carle Illinois College of Medicine. The researchers published their findings in the journal Nature Communications.

Sepsis is triggered by an infection in the body. The body’s immune system releases chemicals that fight the infection, but also cause widespread inflammation that can rapidly lead to organ failure and death.

Sepsis strikes roughly 20 percent of patients admitted to hospital intensive care units, yet it is difficult to predict the inflammatory response in time to prevent organ failure, said Dr. Karen White, an intensive care physician at Carle Foundation Hospital. White led the clinical side of the study. 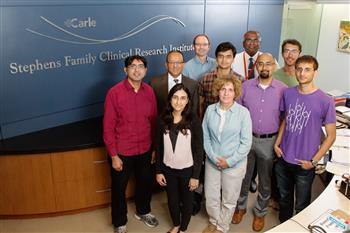 Sepsis is routinely detected by monitoring patients’ vital signs – blood pressure, oxygen levels, temperature and others. If a patient shows signs of being septic, the doctors try to identify the source of the infection with blood cultures and other tests that can take days – time the patient may not have. The new device takes a different approach. 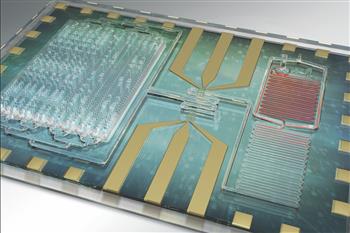 The researchers tested the device with blood samples from Carle patients in the ICU and emergency room. When a physician suspected infection and ordered a blood test, a small drop of the blood drawn was given to the researchers, stripped of identifying information to preserve patient confidentiality. The team was able to monitor CD64 levels over time, correlating them with the patient’s vital signs. Researchers found that the results from the rapid test correlated well with the results from the traditional tests and with the patients’ vital signs.

“By measuring the CD64 and the white cell counts, we were able to correlate the diagnosis and progress of the patient – whether they were improving or not,” said Umer Hassan, a postdoctoral researcher at MNTL and the first author of the study. “We hope that this technology will be able to not only diagnose the patient but also provide a prognosis. We have more work to do on that.”

Bashir’s team is working to incorporate measurements for other inflammation markers into the rapid-testing device to give a more complete picture of the body’s response, and to enable earlier detection. They also have a startup company, Prenosis Inc., that is working to commercialize the device.

“We want to move the diagnosis point backward in time,” Bashir said. “The big challenge in sepsis is that no one knows when you get infected. Usually you go to the hospital when you already feel sick. So the goal is that someday you can be testing this at home, to detect infection even earlier if you can.”

The Center for Integration of Medicine and Innovative Technology Innovation in Boston supported this work through a Point-of-Care Technology Research Center in Primary Care grant. Additional support came from Carle Foundation Hospital and the University of Illinois.

Read the original article on the Illinois News Bureau website and media coverage in the Drug Target Review. This story has been updated to reflect Bashir's new designation as executive associate dean of the Carle Illinois College of Medicine.