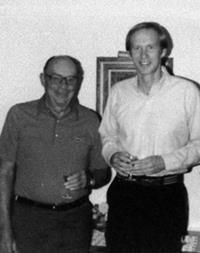 Tucker with John Bardeen in 1987. Tucker chaired a session on applications of superconductivity at the “BCS@50” conference on the Illinois campus in October, commemorating 50 years of Bardeen’s BCS theory of superconductivity. A major application of superconductor tunnel junctions is the lightning-fast down-conversion of incoming millimeter and submillimeter wavelength signals from space. Tucker’s work has enabled engineers to develop radio astronomy receivers that approach the quantum limit.

In the 1970s while working at The Aerospace Corporation, Tucker employed Bardeen's Nobel Prize-winning BCS theory of superconductivity to characterize the performance of experimental millimeter receivers built with superconductor tunnel junctions. Tucker's theory yielded two surprising predictions for noiseless signal amplification and quantum-limited sensitivity. Radio astronomers took immediate advantage of this, and superconductor tunnel junctions are now deployed in the most powerful millimeter telescopes at the world's highest sites and in space.

“When the prediction of amplification popped up, I thought there might be something wrong,” recalled Tucker. “I kept looking for some fundamental physical process to explain this, and I couldn’t find it. I talked to several of the best physicists, and none of them could nail it."

“So when I eventually came here [to Illinois] I still didn’t know where this effect had come from, but it had been confirmed as real. I told John about this, and he started laughing and said, ‘That’s because you’ve never had a course in electrical engineering!’”  In a few succinct sentences, Bardeen explained the answer to Tucker, who had a physicist’s training.

Indeed, Bardeen had studied electrical engineering at Wisconsin for his bachelor’s and master’s degrees before focusing on mathematical physics for his doctorate at Princeton, which he completed in 1936. The practical, engineer’s frame of mind would serve him well when he invented the transistor at Bell Labs in 1947, and again when he developed the theory of superconductivity at Illinois in 1957 as a professor of ECE and physics.

Bardeen advised graduate students, postdocs, and young faculty to take on research with scientific and technological potential. He made sure even his students in theoretical physics spent time working in the laboratory. And he maintained a network of contacts in industry, where scientific advances are put to practical use.

One of Bardeen’s industrial contacts was Ivan Getting, who as president of The Aerospace Corporation invited Bardeen to visit company headquarters in southern California in 1974. It was during this visit that Bardeen and Tucker first met, and later Tucker would accept Bardeen’s invitation to join the ECE faculty in 1981. Soon after settling in at Illinois, the young physicist mentioned his longstanding puzzlement about the superconductor tunnel junctions to his mentor, who credited the amplification to a “transfer of resistance” taking place in photon-assisted tunneling.

“He said,” recalled Tucker, “You could call this a transistor.” To which Tucker replied: “May I remind you, that name has already been taken!”