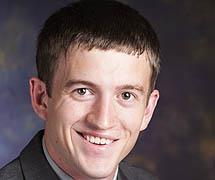 The other recipients include Anthony Coppola (Aerospace Engineering), Allison Goodwell (Civil and Environmental Engineering), and Frederick Douglas (Computer Science). Nominated by their departments, each student received a stipend to support first-year graduate education and research.

A highly competitive honor, Carver Fellowships are awarded to select students who are viewed as exemplary scholars and researchers in academia and industry and as representatives of the legacy of Roy J. Carver, a distinguished University of Illinois alumnus.

Harding’s goal is to advance research related to remote sensing. At Cornell University, he gained research experience with inverse methods on a senior project to reverse-engineer the Iridium satellites’ antenna designs in order to use the satellite constellation to augment GPS. He also contributed to a research project at Space Systems/Loral to model and predict the electromagnetic impact of thermal distortions on the satellite antenna’s beam pointing error.

Harding chose Illinois for graduate study because the “simultaneous depth and breadth of the Electrical and Computer Engineering Department is unparalleled.”

Working with Jonathan J Makela in the Remote Sensing and Space Science group at Illinois, Harding uses optical techniques to study ionospheric dynamics and infer parameters such as electron density, thermospheric wind, and temperature. He is also developing tomographic inversion algorithms for reconstructing 3D movies of the ionosphere based on data from multiple ground-based all-sky imagers. Ionospheric physics could be key to addressing problems of “space weather,” he noted.

“Understanding the ionosphere is important because it reflects radio signals, supporting over-the-horizon communication, and it is also the medium through which satellite communication must propagate,” he said. “Unfortunately, we do not yet understand the dynamics well enough to predict the ionospheric storms that disrupt these links. As our society becomes ever more reliant on space-based communication links and GPS, it becomes ever more important to understand the medium in which these systems are operating.”

Harding plans to be involved in mentoring and tutoring at Illinois, and is considering a career in academia.

“The Carver Fellowship allows me to pursue the most interesting research problems unconstrained by financial or personal concerns,” he said. “This fellowship is a recognition of my past achievements but also a gesture of faith in my potential. It creates a sense of responsibility that is much more personally motivating than that gained from a typical employer–employee relationship.”

About the Roy J. Carver Fellowships

Carver was an engineer, industrialist, and philanthropist whose foresight, enterprising spirit, and judgment exemplify how engineering skill can be combined with business acumen to advance technology. He earned a bachelor’s degree in general engineering in 1934 from the University of Illinois. In the late 1930s, he formed the Carver Pump Company to produce a self-priming pump that he designed, and he made the company a successful business enterprise despite the economic challenges of the Great Depression. In 1942, he established Carver Foundry Products, and he later founded Bandag, Inc., which became the world standard of quality in retreaded tires and equipment for the transportation industry.