“It was really amazing to find out how well both the companies did,” said Boppart, who is the Abel Bliss Professor of Engineering. “I think what this represents is the impact this imaging can have on health care. We need better ways of sensing disease, as well as detecting it early so doctors can make better, more informed decisions.” Boppart’s lab at the Beckman Institute was the birthplace of the foundational technology for both of these companies, and he continues to serve as a chief medical officer at both. The companies develop innovations using optical coherence tomography, or OCT imaging.

This technique is akin to ultrasound. Instead of using sound, it sends out light waves, then builds an image based on the reflected light it collects back. The technique doesn’t have as much depth as ultrasound, but its images have resolutions about 100 times better, making it excellent for imaging a few millimeters deep into body tissue and resolving microstructure.

Its effectiveness at depth-resolved imaging has made it the clinical gold standard for imaging the human eye, and Boppart’s companies are tailoring the technology to applications in finding breast cancer during surgery and detecting ear infections in the doctor’s office.

Diagnostic Photonics, which Boppart co-founded in 2008 with Professor P. Scott Carney, pioneers an imaging technique that is designed to make finding breast cancer much more effective. Currently, a physician who finds a breast cancer tumor in a patient orders a surgery to remove the tumor. A surgeon sends the tumor to a lab, where a pathologist will take a few days to examine it under a microscope to make sure all of the cancerous tissue was taken out.

If the pathologist discovers that more is remaining in the patient, then a second surgery has to be performed. Boppart said about 30 to 50 percent of the time, cancerous cells are left behind and a costly, anxiety-inducing second surgery is necessary.

The technology Boppart co-developed, on the other hand, allows surgeons to image the surgical margins during the operation, and instantly get feedback on whether or not they’ve removed all of the cancer tissue. This possibility could save patients from the nerves and extra expense of waiting for a second surgery, and actually improve upon the traditional imaging method both in terms of time and in terms of how effectively it detects leftover cancer cells. 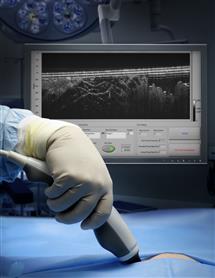 Diagnostic Photonics's probe instantly examines for leftover cancer tissue during surgery, eliminating the need to wait for pathology results.
It works by improving the focus of an image. Traditionally, OCT images have areas that are in focus and out of focus, but Boppart and Carney came up with a way to computationally reconstruct the areas that are out of focus in their images, allowing their technology to image human tissue at greater depth and resolution.

Diagnostic Photonics, which recently raised $3 million to fund a multi-institutional clinical trial, has obtained FDA approval for the imaging technique, and has reimbursement codes available so that physicians can get reimbursed for the cost of using their technology. Boppart said key now is to show the technology to more doctors and patients too. The Propel Center’s award will help.

“Now that we have the essential regulatory approval and reimbursement codes, the important thing now is getting the tech more visibility,” Boppart said. “Studies show that our tech will really make a difference, saving patients surgeries, anxiety, and money.”

The second of the two companies, PhotoniCare, is much newer. Boppart and CEO Ryan Shelton co-founded it in 2013 based on technology they developed under a grant from the National Institutes of Health. While Diagnostic Photonics aims to improve breast cancer detection, PhotoniCare is developing a device, called Clearview, to image inside the human ear. Its technological innovations were based less upon refining OCT’s image quality itself, as Diagnostic Photonics did, and more upon designing cost-efficient, handheld probes to be used as frontline tech in diagnosing ear infections.

“Approximately 98 percent of kids will have an ear infection at some point,” Boppart said. “About half of those will have chronic problems of some form, and about 7 percent end up getting surgery to place small tubes in their ear drums to drain the infection and help it heal. The issue is it’s the No. 1 cause of hearing loss in kids, and it can affect speech and language development.”

Clearview is used in a similar way to doctors' penlights, but will give doctors much more robust information on ear infections.
Boppart’s research team found that every time a patient had a chronic ear infection, it was accompanied by a substance inside their ear called a biofilm: a thick, gooey, antibiotic-resistant colony of bacteria that adheres to the middle ear surfaces and is difficult to get rid of.

PhotoniCare’s solution was to develop an inexpensive probe that replace penlights, instantly imaging the inside of patient’s ears and allowing doctors to detect biofilms instantly. This technique would allow doctors to do away with spending months trying to treat ear infections with ineffective antibiotics, and potentially order surgeries to correct the infection much sooner. The company is awaiting full FDA approval, and is currently collecting clinical data.

Photonicare's Clearview device detects a biofilm in the inner ear.
“Both of these companies’ ideas have the potential for broad societal impact,” Boppart said. “One in eight women will have invasive breast cancer at some point, and ear infections are so pervasive in children that anyone with kids knows about them. These are compelling solutions, and it’s the role of industry to really drive them. As an academic, I come up with ideas in the lab, and then allow them to germinate into companies that can take the technology forward and get it in the hands of doctors, taking it from the lab bench to the bedside.”